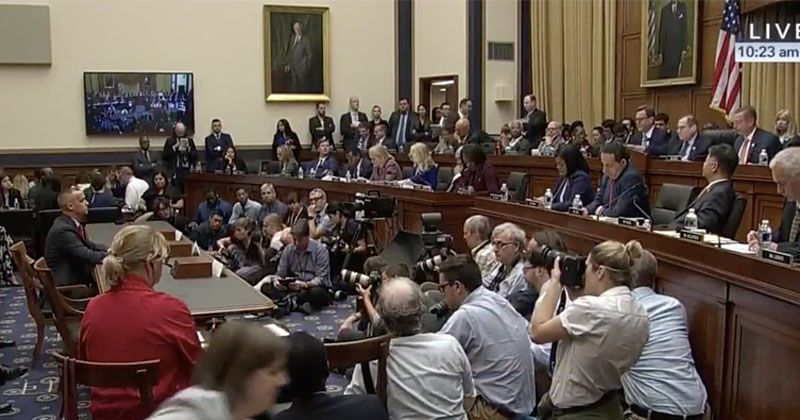 Lewandowski’s opening statement made it clear his thoughts on the true purpose of Tuesday’s hearing, charging Democrats with prolonging the fake Russia hoax despite special counsel Robert Mueller and the DOJ finding no evidence of collusion or obstruction of justice.

In this clip, Lewandowski mockingly refers to Swalwell (D-Calif.) as “President Swalwell” after the failed presidential candidate grilled him over why he wouldn’t read a question aloud.

Everything about this back and forth between Swalwell and Lewandowski is amazing but Lewandowski repeatedly calling him “President Swalwell” is *chef’s kiss* pic.twitter.com/456pbDer2d

When Rep. Hakeem Jeffries (D-N.Y.) asked Lewandowski if he was a “hit man or bag man” for Trump, Lewandowski responded, “I’m the good-looking man, actually.”

“Are you the hit man, the bag man, the look out, or all of the above?”

Lewandowski also shut down Rep. Sheila Jackson-Lee (D-Texas) after she launched into a rambling “rant” against him, seemingly with no question to ask him.

Corey Lewandowski to Rep. Sheila Jackson Lee: “Could you repeat the question? I didn’t hear it. Just a rant.”

A rambling Johnson reading from the Mueller report tries hard to make something from nothing. Get’s blown out. 🤣 #lewandowskihearing pic.twitter.com/GaKVsGflKJ

Republican members of the committee like Reps. Doug Collins (Ga.), John Ratcliffe (Texas), and Matt Gaetz (Fl.) also had opportunities to respond to the Democrats’ insane line of questioning and unbecoming conduct.

“There are 135 Democrats and Socialists in the House of Representatives that have publicly come out for impeachment.” –@RepRatcliffe pic.twitter.com/OcScLx1Bt9

The greatest roll call vote in the history of the House.

Brought to you by Doug Collins, featuring Corey Lewandowski.

Jim @Comey should be sitting in that chair. He should be answering questions about why he did so much damage to the FBI and our country, including not giving you the briefing you were entitled to. pic.twitter.com/GSieeoJLGb

And this is just the first hearing of many more to come, as Nadler has vowed to proceed with a string of hearings until they can find something to use against Trump ahead of the 2020 election.

Watch Lewandowski’s full testimony before the House Judiciary Committee below:

The looming indictment of Andrew McCabe sheds light on the corrupt deep state bent on staging a coup against a duly elected President.