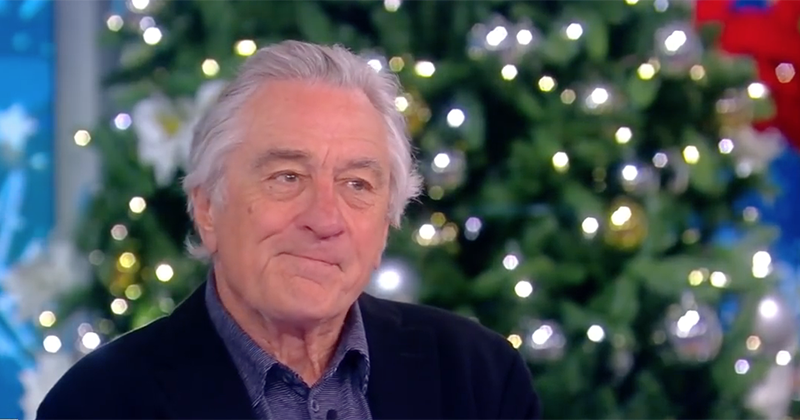 Hollywood uber leftist Robert De Niro declared Monday that he would disown his children if they were anything like President Trump’s family, and called the president a ‘a low life’ who is worse than a murdering mobster.

“I don’t want my kids to take this the wrong way, but if my kids did what [Trump’s] kids did, I wouldn’t want to be related to them. I would disown them.” De Niro raged.

“I would have a serious talk with them.” he continued, adding ” if I disagreed with them on things of principle, I would say, and they felt it, and we do now.” he added.

De Niro, appearing on The View to promote his latest movie, in which he plays a murderous hitman, also declared that he knows the impeachment proceedings are a charade, but “We have to go through the motions” because “Symbolically, it means something. It’s a taint on his presidency, more than a taint. It’s a stain, one that he deeply deserves.”

“No matter what happens, which we know probably in the Senate he won’t get convicted or whatever, but we have to do this,” De Niro noted.

When asked if it was worth losing an election over, De Niro snapped back “We don’t have time for that. He did something wrong: he has to pay for it – period.”

The actor then asserted that Trump is worse than on screen psychopaths and killers he has played, stating “‘To me, he is because he has no understanding that I can see of the outside world other than anything around him.”

“He has no idea of what his purpose in life as the president should be, and that is to pull the country together, to be for the people, to heal wounds, not to open them up and pour salt on them.” De Niro added.

“I always say he’s a low life,” he continued. “And he knows he’s a low life. He knows everything he projects about negative things on individuals, on situations, on institutions, he’s saying about himself.”

Sounds like you’re describing someone closer to home there Bob.

De Niro constantly slams Trump at every opportunity. Just last week in an interview with the New York Times, the actor vowed to never play Trump on-screen because there’s “nothing redeemable about him” or his family.

“There’s not one thing that I see in him or his family, not any redeeming qualities. They’re out on the take. It’s like a gangster family,” he declared.

…realize the economy is the best it’s ever been with employment being at an all time high, and many companies pouring back into our country. Wake up Punchy!