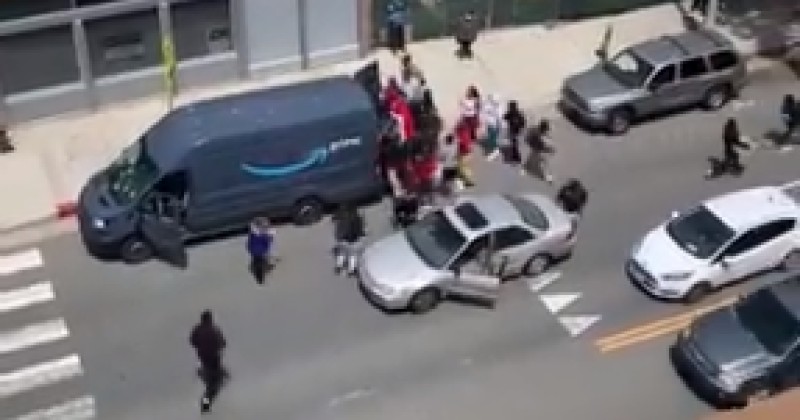 Despite their best efforts to corporate virtue signal in favor of the rioters and looters currently tearing apart American cities, both Nike and Amazon were targeted anyway.

Last week, Nike tweeted a video in which the company urged people, “Don’t turn your back on racism,” “don’t pretend there’s not a problem in America” and demanding people “be part of the change.”

Within days footage emerged of rioters looting a Nike store, which is undoubtedly one of several that have been targeted over the last few days.

There’s an added layer of irony to the footage when you consider the fact that Nike used Colin Kaepernick, the face of the “take a knee” campaign, for its 2018 commercial in which Kaepernick asserted, “Believe in something. Even if it means sacrificing everything. Just Do It.”

Nike made $6 billion dollars from the ad, so they’re probably not too fussed about a handful of their stores being looted. Supporting looters is more lucrative than denouncing them, even at the cost of comparatively minor property damage and stock loss.

Meanwhile, Amazon issued a statement from its official Twitter account yesterday declaring, “The inequitable and brutal treatment of black people in our country must stop. Together we stand in solidarity with the black community, our employees, customers, and partners – in the fight against systematic racism and injustice.”

They pledged their support for the rioters even as their own employees were being targeted by the mob.

⁦@JeffBezos⁩ ⁦@amazon⁩ people are looting your trucks in Santa Monica, CA. Get your drivers home safely. People can wait a day for packages. ⁦@santamonicacity⁩ ⁦@SantaMonicaPD⁩ pic.twitter.com/w5YD2Cdh1G

Video footage out of Santa Monica, California shows an Amazon truck being ransacked by a group of what the media will no doubt describe as “white nationalists.”

“You can see the mob looting the Amazon delivery truck and knocking what looks like an old white lady to the ground while ripping the purse out of her hands in this video,” writes Chris Menahan.

Will Amazon denounce such attacks on their own staff or will they continue to support the looters?

The answer is obvious.