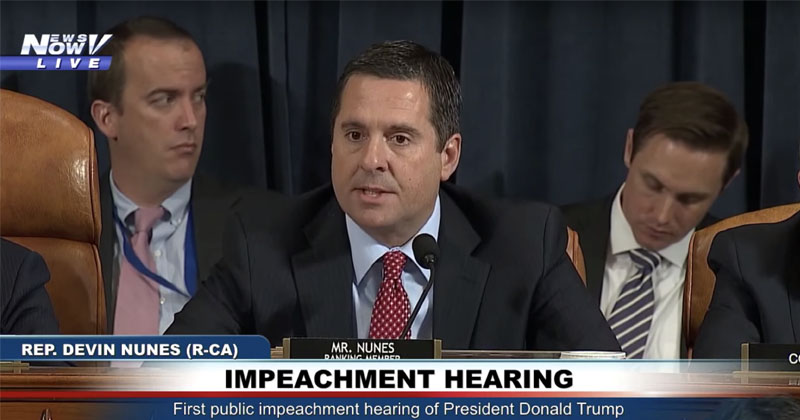 Nunes first compared this new impeachment effort by the Democrats with their failed Russia collusion attempt, noting they’re using the same deceptive tactics and lies that are being promoted by the mainstream media.

“We’re supposed to take these people at face value when they trot out a new batch of allegations, but anyone familiar with the Democrats’ scorched earth war against President Trump would not be surprised to see all the typical signs that this is a carefully orchestrated media smear campaign.”

Nunes then highlighted Schiff’s completely “fictitious” and fabricated conversation of Trump and Ukraine President Zelensky that he performed in September.

“At a prior hearing, Democrats on this committee read out a purely fictitious rendition of the president’s phone call with president Zelensky,” Nunes stated Wednesday. “They clearly found the real conversion to be insufficient for their impeachment narrative, so they just made up a new one.”

Nunes pointed out that Schiff coordinated with the so-called whistleblower in secret before he filed a complaint against Trump, noting he prohibited Republicans from cross-examining him.

“And most egregiously, the staff of Democrats on this committee had discussions with the whistleblower before his or her complaint was submitted to the Inspector General,” Nunes said.

“Republicans can’t get a full account of these contacts because Democrats broke their promise to have the whistleblower testify to this committee. Democrats members hid these contacts from Republicans and then lied about them to the American people on national television,” he added.

Nunes went on to blast Democrats for refusing to allow Hunter Biden to testify in the hearings given the entire Ukraine debacle is centered around him.

“They are trying to impeach the president for inquiring about Hunter Biden’s activities,” he said, “yet they refuse our request to hear from Biden himself.”

“This spectacle is doing great damage to our country. It’s nothing more than impeachment process in search of a crime. And I yield back.”

Matt Bracken breaks down the whistleblower Eric Ciaramella as the key to understanding the coup against Trump.