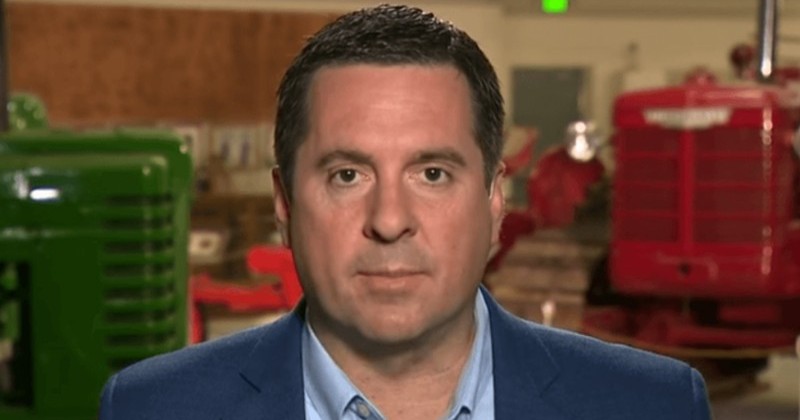 Rep. Devin Nunes (R-Calif.) announced Friday night that he is suing the Washington Post, accusing the paper of publishing “demonstrably false” “garbage” about him.

“I don’t know what planet the Washington Post is on but they’ll have an opportunity in federal court in the next couple weeks to explain who their sources are because I’m going to have to take them to court,” Nunes told Fox News host Harris Faulkner.

Nunes was appearing on Fox’s “The Story” (with Faulkner filling in for Martha MacCallum) to talk about a recent classified briefing to House intelligence members. As has become expected, information (and disinformation) from that briefing was promptly leaked to the media.

On Thursday, the New York Times reported that Russia was actively trying to help President Trump win the 2020 election, an allegation few people outside of the never-Trump fever swamps takes seriously. Then late Friday, the Washington Post reported—also based on anonymous leaks—that Russia is also trying to help the Bernie Sanders Campaign.

“The most concerning part about all this is that we can’t talk about what happened in that meeting,” Nunes explained.

“So if anything in the Washington Post story or the New York Times story is true about either Bernie Sanders or Putin’s plans and intentions or anything else, nobody on the committee that’s seen this classified information should be talking about it.”

Nunes then tore into the Washington Post for claiming in a separate story that he told President Trump “really bad things” in an attempt to get him to fire his acting acting director of national intelligence, Joseph Maguire.

WaPo reported on Friday that a senior intelligence official told congress that Russia wanted to see him reelected.

The official, Shelby Pierson, said several times during the briefing that Russia had “developed a preference” for Trump, according to a U.S. official familiar with her comments. That conclusion was part of a broader discussion of election security that also touched on when the U.S. government should warn Democratic candidates if they are being targeted by foreign governments.

The analysis reportedly made the president unhappy with Maguire, and that, according to anonymous sources, is what spurred him to announce Wednesday that he was replacing Maguire with U.S. ambassador to Germany Richard Grenell.

Maguire, however, is leaving his post because his 200 day acting director term will be expiring soon.

One of the Post’s anonymous sources said that Trump learned about Pierson’s remarks from Nunes, the Intel committee’s ranking Republican.

Trump’s suspicions of the intelligence community have often been fueled by Nunes, who was with the president in California on Wednesday when he announced on Twitter that Grenell would become the acting director, officials said.

Nunes told Faulkner that he is suing the Washington Post because the story is a complete fabrication.

“I didn’t talk to President Trump, Harris,” Nunes said, calling the report “the same garbage” they reported about him sneaking to the White House three years ago.

“They build a narrative, they plant a narrative, they write fake news stories about it of things that shouldn’t even be talked about, you know, this classified information. And then they run these stories. Who the hell is leaking this?” he wondered.

“How do you make up a story like this?” he asked plaintively.

The California Republican went over the timeline of events leading up to the fake news reports.”[Rep.] John Ratcliffe was nominated, the press went after him so John Ratcliffe said, ‘hey, forget this’; Maguire was put in temporarily—his time is coming up; now they’re bringing our ambassador to Germany back, Mr. Grenell, to be in that position,” he explained.

“So how on earth are people who are getting classified briefings—how does this end up in the Washington Post and the New York Times? All I can tell you is it’s total garbage and demonstrably false. I didn’t talk to the president,” he insisted.

“But you have CNN, the Washington Post, all the usual suspects claiming that I went somewhere that I didn’t go. This has got to stop and this is why the courts have to step in,” he declared.

Devin Nunes: “I want to congratulate the Democrats on the rollout of their latest information warfare operation against the president and their extraordinary ability to once again enlist the mainstream media in their campaign.”