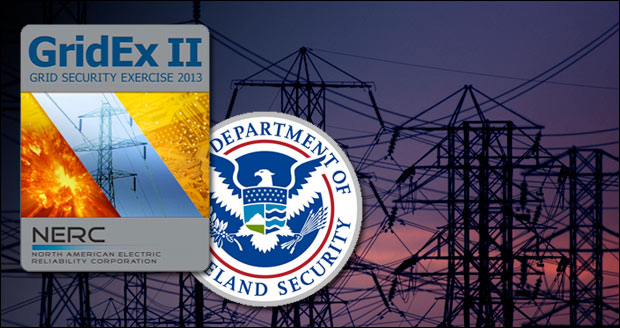 The Department of Homeland Security and the Federal Emergency Management Agency will participate in GridEx II, an international electric system security exercise that will be held between November 13-14.

“The scenario will build on lessons learned from GridEx 2011 and include both cybersecurity and physical security components,” explains NERC, the North American Electric Reliability Corporation. “GridEx is a biennial international grid security exercise that uses best practices and other contributions from the Department of Homeland Security, the Federal Emergency Management Agency, and the National Institute of Standards and Technology.”

The New York Times provided details on the drill back in August.

The newspaper reported “thousands of utility workers, business executives, National Guard officers, F.B.I. antiterrorism experts and officials from government agencies in the United States, Canada and Mexico are preparing for an emergency drill in November that will simulate physical attacks and cyberattacks that could take down large sections of the power grid.”

The exercise will involve 5,800 major power plants and 450,000 miles of high-voltage transmission lines.

The Times reports that the federal government and private industry worked together to establish the Electricity Sub-Sector Coordinating Council comprised of high-level executives and federal officials.

GridEx II was “being planned as conferences, studies and even works of fiction are raising near-apocalyptic visions of catastrophes involving the grid,” the Times notes.

In 2012, former CIA boss R. James Woolsey and others began pressuring legislatures in the states to force private sector utility companies to protect electrical infrastructure against the catastrophic effect of an EMP, or electromagnetic pulse. The assumption is that North Korea or rogue elements within government will stage an EMP, take out the power grid, and plunge civilization into the dark ages.

Former Congressman Newt Gingrich wrote a novel published in 2009 about an EMP attack. In another novel, Gingrich spins a fictional account of terrorists taking down the U.S. power grid with the help of Iran.

NERC is responsible for planning the exercise.

“NERC is running a simulated exercise to practice crisis response and information sharing.  No real power outages will occur due to this exercise.  The scenario does not involve EMP,” NERC responded when asked about a potential blackout.