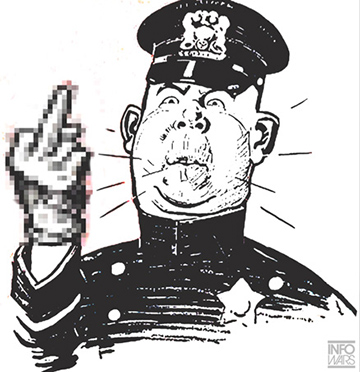 The uselessness of the Department of Homeland Security’s Fusion Centers has been detailed here before, but they’ve never been quite as useless as this. Here’s the backstory, from Carlos Miller at Photography Is Not A Crime.

All Jeff Gray has been trying to do is ensure law enforcement officers honor the oath they swore to the Constitution upon receiving their badge, which is why he routinely video records them in public for his Youtube channel, HONORYOUROATH.

But that has led him to become the subject of an active investigation by the Florida Fusion Center, a collusion of local, state and federal law enforcement agencies encouraging citizens to rat on each other for taking too many pictures or asking too many questions.

When not recording interactions with cops, Gray also photographs publicly-visible structures like government buildings and prisons — the sort of photography that has been equated with terrorism by the DHS.

The most ridiculous document Jeff Gray obtained was from a DHS Fusion Center. Here’s the Center’s rationale for treating Gray with suspicion: He’s clearly covered by the First Amendment. We just don’t like his attitude.

On 06-23-2013, units with CCSO were dispatched to CCA, a private prison located within Columbia County, after being contacted by prison staff in reference to a suspicious person. The Subject was recording and or taking pictures of the front as he was standing on a public access across the street from the prison. Once confronted by prison staff the subject only stated that he was an independent journalist and was doing a story on the prison system. The subject refused to stop videoing after being asked to do so by prison staff. During the confrontation the subject referred to his first amendment right to be there and continued to question and press the staff to give him a reason why he could not record the outside of the facility. Once law enforcement arrived, the subject was asked for identification, the subject asked if he was being detained and once told that he was not he refused to provide ID to law enforcement. Ultimately the situation was diffused and the subject left. The subject later posted the videos of his encounters with the prison staff and CCSO Deputies on YouTube and on another website called photography is not a crime.com. This subject is exercising his first amendment rights, however the manner in which he lures the officers in is concerning.

To paraphrase Homer Simpson: it takes two to lure, one to lure and one to overreact to the utter lack of criminal activity. But the Fusion Center obviously believes that, First Amendment or no, Gray should be checked out because he’s making police officers, prison staff and government agents looks bad with his “manner.”

On the bright side (I guess…), the Fusion Center’s “investigation” apparently involved little more than rigorously browsing the internet.

The findings? Gray urges people to “flex their rights,” and publicly calls out (via YouTube postings) officers who fail to respect his rights. Troubling stuff, but not for the reason the DHS thinks.

Beyond the DHS’s belief that Gray’s attitude should somehow nullify his rights, other troubling info was uncovered as well.

Gray also obtained a series of field intelligence reports from the St. Johns Sheriff’s Office regarding his video activity. One of the reports includes an incident when he was visited by the Florida Department of Children and Families after they claimed they received an anonymous tip that he had guns in his home, which is not a crime and not even a secret considering Gray is very open about his gun ownership.

But that didn’t stop DCF from interviewing his children at school without his knowledge before paying him a visit at home, which he video recorded and posted on Youtube, as well as his follow-up phone conversation with the investigator that his children were not in any imminent danger, so there was no need to further investigate him.

I guess the lesson here is that “luring” cops and security guards through the open exercise of your rights is all the reason needed for law enforcement and government agencies to open investigations. The implication that there’s something more wrong with Gray’s “luring” than there is with law enforcement’s response is ridiculous. Law enforcement officers certainly don’t need to “flex” their misguided muscle when confronted with a citizen “flexing” their rights. One is wholly optional while the other is actually protected activity.

This lousy spin attempt from the Fusion Center does nothing to improve the reputation of this national travesty. Maybe next time, officers could just walk away and not become YouTube fodder. But they can’t seem to help themselves, and the DHS seems to believe it’s all Gray’s fault.