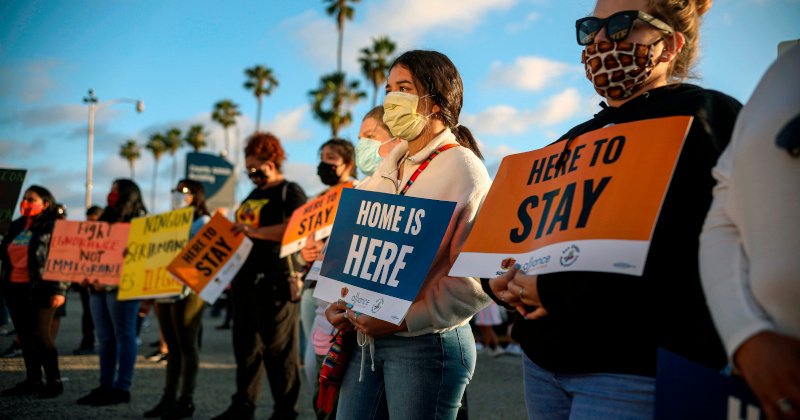 The U.S. Department of Homeland Security said Tuesday it will not accept any new applications for a program that shields from deportation people who were brought to the country illegally as children, drawing criticism from immigrant rights advocates and Democrats in Congress.

Acting Secretary Chad Wolf wrote in a memo he is launching a review of the Deferred Action for Childhood Arrivals (DACA) program, and that in addition to rejecting new applications during that time, his agency is also allowing current participants to renew their status and work permits for only one year instead of the previous two-year periods.

A third restriction will not allow existing participants to travel and re-enter the United States under a system called advanced parole, unless in cases of “exceptional circumstances.”

President Donald Trump tried to end the DACA program that was enacted by his predecessor President Barack Obama in 2012, but the Supreme Court ruled last month that the Trump administration did not follow proper procedures in shutting it down.

There are about 650,000 people who are part of DACA. To qualify, they had to have come to the United States before their 16th birthday, been in the country continuously since mid-2007, be under the age of 31 in mid-2012, have no felony or significant misdemeanor convictions, pose no national security threat, and have either a high school diploma, been enrolled in school, or have a record of service in the U.S. military.

The Obama administration argued that those who qualified were people who lacked a legal immigration status through no fault of their own, in many cases knew only the United States as home and were contributing to the country. Obama called the program a “stopgap” measure meant to protect the immigrants from deportation and urged Congress to enact fixes to what he called a “broken immigration system.”

Wolf noted in his memo that Congress has not taken any action on the issue and said there has arguably been “more than sufficient time to consider affording permanent status or immigration relief to the class of aliens covered by the policy.”

Speaking to the administration’s main criticisms of the program, Wolf said: “DACA makes clear that, for certain large classes of individuals, DHS will at least tolerate, if not affirmatively sanction, their ongoing violation of the immigration laws. I am deeply troubled that the message communicated by non-enforcement policies like DACA may contribute to the general problem of illegal immigration in a manner that is inconsistent with DHS’s law enforcement mission.”

A senior administration official told reporters in a briefing call Tuesday that Homeland Security’s review “will have to take time,” and would not give a timetable as to when it might be completed.

“The vast majority of Americans—including most of Republicans—support protecting Dreamers from deportation,” Nadler and Lofgren said. “And more than a year ago, the House of Representatives passed the American Dream and Promise Act to provide certainty and stability to this deserving group of young people. Majority Leader McConnell should join the right side of history and immediately take up and pass this critical legislation. We cannot afford to wait any longer.”

The National Immigration Law Center said the Trump administration is “choosing to increase fear and uncertainty for immigrant families” at a time when those communities are dealing with spikes in COVID-19 cases.

“The admin may continue its bigoted and politically motivated attacks on DACA, but we will fight back against this unspeakable cruelty,” the group tweeted.

Trump gave little detail Monday on his plans as he spoke to reporters, saying without specifics that he would make DACA recipients “happy,” and that work continues on his administration’s plans to change which immigrants are allowed into the country.

“We’re going to work with a lot of people on DACA,” Trump said. “And we’re also working on an immigration bill, a merit-based system, which is what I’ve wanted for a long time.”

Former Vice President Joe Biden, who served under Obama and is opposing Trump in the November presidential election, said if elected he would protect the group of immigrants nicknamed “Dreamers” and give them and other undocumented immigrants in the United States a pathway to citizenship.

“It’s unconscionable that the Trump Administration has continued its attacks on DACA recipients, especially while our country is battling COVID-19 and many of these young people are risking their lives to keep us safe and healthy,” Biden told reporters Monday. “Nearly a third of all current DACA recipients are essential workers helping our communities respond to the pandemic. Close to 30,000 of them are front-line health care workers.”