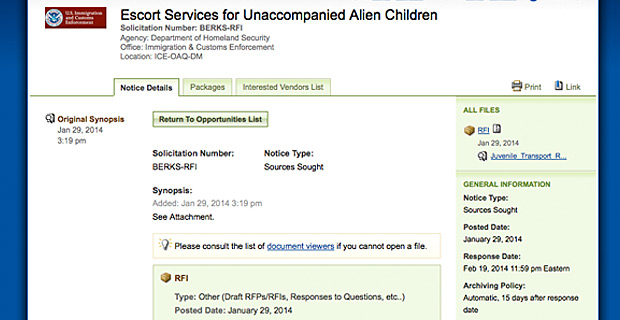 The Department of Homeland Security is set to pay for illegal minors up to the age of 17 to be escorted into the United States, according to a new solicitation posted at FedBizOpps.

ICE [Immigration and Customs Enforcement] is seeking the services of a responsible vendor that shares the philosophy of treating all UAC with dignity and respect, while adhering to standard operating procedures and policies that allow for an effective, efficient, and incident free transport. The Contractor shall provide unarmed escort staff, including management, supervision, manpower, training, certifications, licenses, drug testing, equipment, and supplies necessary to provide on-demand escort services for non-criminal/non-delinquent unaccompanied alien children ages infant to 17 years of age, seven (7) days a week, 365 days a year. Transport will be required for either category of UAC or individual juveniles, to include both male and female juveniles. There will be approximately 65,000 UAC in total: 25% local ground transport, 25% via ICE charter and 50% via commercial air.

The post does not explain how ICE arrived at the figure of 65,000 children, nor does it clear up why 50% of the illegal minors are arriving via commercial air. The DHS intends to award the chosen vendor(s) 5 year fix priced contracts.

Non-profit groups and churches are chauffeuring illegal immigrants from a bus station in McAllen, Texas before giving them temporary shelter and later releasing them onto the streets.

Infowars reporters witnessed children and their mothers, primarily consisting of illegals from Guatemala, being picked up throughout the day by vans marked TFC (the Family Church), before being driven to nearby facilities.

An employee of the organization admitted to Infowars that once the illegals are taken into temporary care, where they enjoy hot showers, food and a place to sleep, they are subsequently released and allowed to go “wherever they want to go.”

It subsequently emerged that the U.S. Customs and Border Patrol was paying for bus tickets and vouchers in order to help the illegals be transported much deeper into the country.

“What happened today in particular is that the Border Patrol dropped off what they call detainees but obviously they’re not detained when they drop them off,” McAllen, Texas City Attorney Kevin Pagan said in an interview with Infowars. “Normally they have tickets or arranged transportation to go somewhere in the interior [of the U.S.].”

Infowars reporter Jakari Jackson also asked Pagan why the Border Patrol is bringing them to the Sacred Heart Catholic Church in McAllen.

“They’re not bringing them here, they’re bringing them to our bus terminals because that’s where the Border Patrol understands that they have transportation to go to the interior,” he stated. “So they’re dropping them off and it’s our understanding that they were dropped off with tickets or with vouchers for tickets, but it turns out that some of them tonight didn’t have their tickets or their vouchers for tickets, or like I said their buses are tomorrow, so they have no where to stay.”

“Our bus terminal – by ours I mean the City of McAllen – is not a 24/7 operation so we got to put them up somewhere else.”

In other words, the U.S. government is purposely harboring illegal aliens within the U.S. while passing the costs to American taxpayers.

These revelations arrive in the aftermath of reports that the Rio Grande Valley has experienced an “endless surge” of immigrants attempting to illegally cross the border.