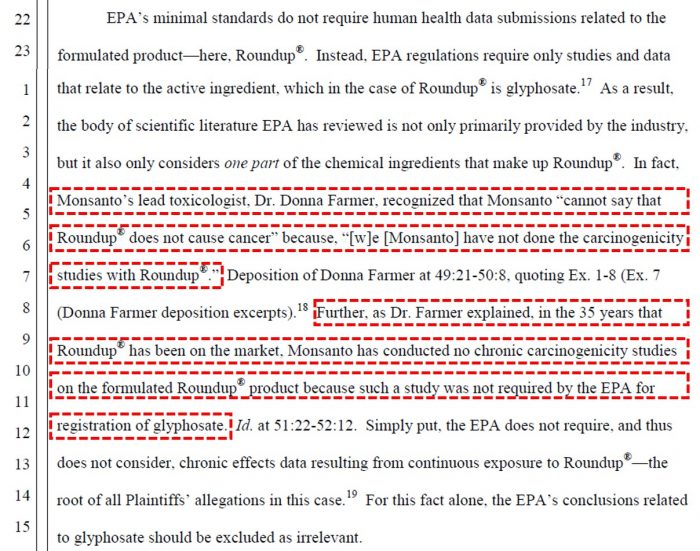 The EPA’s inspector general has launched an investigation into possible collusion between a former high-ranking EPA official and Monsanto, the maker of RoundUp. [1]

The probe was initiated in response to a request from Rep. Ted Lieu, a Democrat from California, for an investigation into whether the EPA official colluded with the biotech giant to tilt research on glyphosate in favor of Monsanto’s claim that the chemical does not cause cancer in humans.

This, despite Monsanto having never conducted carcinogenicity studies on RoundUp.

Lieu’s request was based on media reports of documents released as part of a lawsuit against Monsanto alleging that glyphosate is carcinogenic and that the company may have spun research and hired scientists to cover it up.

Inspector General Arthur A. Elkins Jr. wrote in a letter he sent to a lawmaker on 31 May, 2017:

“As you are you aware, there is considerable public interest regarding allegations of such collusion. As a result, I have asked the EPA OIG Office of Investigations to conduct an inquiry into several agency review-related matters.” [1]

The lawsuit-related documents refer to internal Monsanto e-mails that mention Jess Rowland, a former manager in the EPA’s pesticide division.

In a press release, the Center for Biological Diversity, a nonprofit organization dedicated to protecting endangered species, notes that the documents contain these potentially incriminating revelations:

It appears that at the time the original e-mail was sent, Monsanto was trying to recruit Rowland to help shut down a review of glyphosate within the U.S. Department of Health and Human Service’s Agency for Toxic Substances and Disease Registry division.

Rowland has since retired after spending 26 years at the agency, and plaintiffs’ lawyers have been deposing him about accusations that Monsanto may have paid him off for his efforts via third parties. [1] [2]

OIG investigators will likely begin interviewing Rowland’s former colleagues and bosses, pulling records and poring through e-mails, according to Michael Hubbard, a retired Special Agent in Charge for the EPA’s criminal investigations division. It’s also likely that investigators at the Department of Justice’s Public Integrity Section will be pulled into the mix. Additionally, subpoenas could be granted to allow access to Rowland’s bank records.

“You want to start looking at money trails. Has he benefitted from Monsanto? Was the money changing hands with him or his significant other?” [1]

It wouldn’t be shocking to learn that Monsanto was working with an EPA official to quash damaging research. This is the same company that allegedly has its own department of Internet “trolls” tasked with trashing negative articles and comments about RoundUp.

Monsanto will do anything to cover up the toxic truth about glyphosate. After the IARC declared glyphosate “probably carcinogenic,” the company pressured the WHO agency to reassess the herbicide, and continues to insist that “there is no evidence of carcinogenicity” in RoundUp’s main ingredient.