NATO’s haste to convince Libyans and the watching world that Colonel Gaddafi’s regime had collapsed even as fighting still raged seemingly forced their hand in staging the Green Square “celebration” that was endlessly broadcast by the establishment media to lend the rebel siege on Tripoli a sense of legitimacy.

In fact, what we probably witnessed was a repeat of the Firdos Square farce, the infamous 2003 toppling of a Saddam Hussein statue in Baghdad that was scripted and staged by the Pentagon for mass TV consumption.

The proof can be seen in a comparison of pictures of the event broadcast by Al-Jazeera and genuine photos of Green Square taken before the supposed celebration. 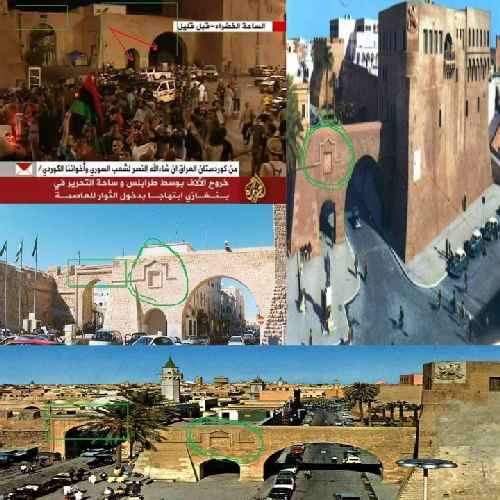 The buildings in the Al-Jazeera footage are noticeably lacking in details seen in the genuine photos, and look like nothing more than a studio set.

The most obvious discrepancy is the stylized design which appears above the smaller archway in the genuine photos. This is nowhere to be seen in the Al Jazeera clip.

Similarly, above the larger archway on the left side of the genuine photos, there is another ridged design element on the building which is completely different in the Al-Jazeera footage.

The fake scenery has purportedly been set up in Qatar for purposes of psychological manipulation. The Stop War Crimes website also reports that the footage showing victorious rebels in front of Gaddafi’s Bab al-Azizia compound could similarly have been faked.

The fake footage serves two purposes according to the Stop War Crimes blog. “To break the Libyan resistance by creating panic and chaos in the Libyan capital,” and “to provide cover for the massacres of civilians that would occur in the days following the declaration of rebel victory.”

There are conflicting reports about how much territory the rebels actually control. While the establishment media brazenly claimed the rebels controlled virtually all of Tripoli almost instantly, this figure has consistently been revised downward. It would have been necessary to stage victory footage at strategic locations if these victories had never actually occurred.

To be fair, there’s an element of “Baghdad Bob” in the propaganda of both Gaddafi’s forces and NATO, but this wouldn’t be the first time that scenes of jubilation supposedly in response to the fall of a dictator have been staged or misrepresented by the media.

The toppling of the Saddam Hussein statue in Firdos Square in central Baghdad on April 9, 2003 was the creation of an “Army psychological operations team that made it appear to be a spontaneous Iraqi undertaking,” according to the Army’s own internal study of the affair.

Television pictures at the time showed close-up shots of jubilant Iraqis pulling down the statue as reporters from BBC News and other mainstream commentators boldly proclaimed the scene as an iconic moment in modern history, proving that the invasion of Iraq was really about liberating people from a tyrant and not geopolitical conquest.

However, when wide shots of the scene were viewed it became obvious that the event was the work of just a few dozen Iraqis, led by Pentagon stooge Ahmed Chalabi, and not thousands of ordinary Iraqi people as the establishment media claimed at the time.

Given that the siege on Tripoli has been directed primarily by British Special Forces and other NATO commanders, it would be naive to think that psychological operations has not played a significant role in the media’s treatment of unfolding events. Indeed, according to numerous independent journalists on the ground who have been targeted by snipers as well as receiving death threats, there are several MI6 and CIA agents posing as mainstream media reporters.

Truth is always the first casualty of war, and there has been a deliberate propaganda campaign on behalf of NATO forces to pre-empt Gaddafi’s fall from power by using the establishment media to broadcast the end of his regime before it has actually collapsed.

Nowhere was this more evident than when Saif al-Islam Gaddafi appeared in Tripoli to disprove rebel claims that he had been arrested hours earlier, a development that even Senator John McCain called “a PR coup” for Gaddafi’s regime.

Regime change is just as much about media perception as it is about logistics, that’s why the corporate press has been keen to characterize the rebels as glorious freedom fighters when in fact they are being commanded by Al-Qaeda terrorists who have killed U.S. troops.

We won’t see an end to this manipulation even after Gaddafi’s government is eviscerated. The need to bestow artificial legitimacy on the Transitional National Council will ensure the establishment media continues to manufacture fables to re-affirm the myth that the conquest of Libya is anything other than another aggressive act of regime change by globalist powers.

A video comparison of the Green Square photos and the footage broadcast by Al Jazeera can be watched below. Be sure to pause the clip and play “spot the difference” for yourself.