Dead civilians in South Ossetia. But you will not hear much about it on CNN or Faux News. Because they are too busy reporting ad nauseam about the extramarital shenanigans of CFR darling John Edwards.

“Russian officials believe that it was the USA that orchestrated the current conflict. The chairman of the State Duma Committee for Security, Vladimir Vasilyev, believes that the current conflict is South Ossetia is very reminiscent to the wars in Iraq and Kosovo,” reports Pravda, the Russian newspaper.

Recall the CIA admitting it “helped to train the Kosovo Liberation Army before Nato’s bombing of Yugoslavia,” according to The Sunday Times. The KLA is a perfect outfit for the CIA. “Known for its extensive links to Albanian and European crime syndicates, the KLA was supported from the outset in the mid-1990s by the CIA and Germany’s intelligence agency, the Bundes Nachrichten Dienst (BND). In the course of the 1999 war, the KLA was supported directly by NATO,” writes Michel Chossudovsky. “The KLA had extensive links to Al Qaeda, which was also involved in military training. Mujahideen mercenaries from a number of countries integrated the ranks of the KLA, which was involved in terrorist activities as well as political assassinations.” Of course, “links to Al Qaeda” translate into links to the CIA.

“The things that were happening in Kosovo, the things that were happening in Iraq – we are now following the same path. The further the situation unfolds, the more the world will understand that Georgia would never be able to do all this without America. South Ossetian defense officials used to make statements about imminent aggression from Georgia, but the latter denied everything, whereas the US Department of State released no comments on the matter. In essence, they have prepared the force, which destroys everything in South Ossetia, attacks civilians and hospitals. They are responsible for this. The world community will learn about it,” Vasilyev told Pravda.

Indeed, the world will learn about it, but not by way of America’s corporate media, more interested in the entirely meaningless baby-making of Clay Aiken and Jaymes Foster. Bread and circuses shall suffice in America.

U.S. loads up Georgia with weapons to fight “al-Qaeda”

The Federation of American Scientists website reveals that Georgia

is the most recent recipient of U.S. weapons and aid, receiving 10 UH-1H Huey helicopters (four for spare parts only) and $64 million in military aid and training to fight Arab soldiers with alleged ties to Al Qaeda that have been participating in the Chechen war and are now taking refuge in the Pankisi Gorge region in northern Georgia. Like many of the recent aid recipients, claims that Georgia has become an al Qaeda sanctuary are dubious at best.

“The rapid increase in US strategic influence in the Caucasus has alarmed Russian policy planners. Moscow is keen to take steps to shore up its eroding position in the region. However, Russian officials have limited options with which to counter US moves while at the same time maintaining cordial relations with Washington,” Eurasia.net reported on April 8, 2002. “The most prominent US moves in the Caucasus are the decision to dispatch military advisers to Georgia and a March 29 State Department announcement on the lifting of an arms embargo imposed on Armenia and Azerbaijan. Both actions have the potential to tilt the military establishments of all three Caucasus nations away from Russia and towards NATO.”

Imagine Canada decided to enter a military and diplomatic alliance with Russia and Canada began arming itself to the teeth with Russian weapons and training with Russian military advisers. Can you guess what the reaction of Bush and the neocons would be?

It doesn’t take much imagination.

Of course, this al-Qaeda presence is not so dubious when one considers the well documented fact the supposed Islamic terror group is a CIA contrivance. As well, this absurd concern for al-Qaeda’s presence under Georgian beds helped make possible Georgia’s so-called Rose Revolution. “The Rose Revolution was not a simple uprising but was aided by the CIA and Ambassador Richard Miles (think Serbia). From early 2002 onwards the CIA had been operating in Georgia, supposedly to combat Al Qaeda,” explains researcher James Schneider.

It appears the CIA has worked behind the scenes for quite a while in Georgia. Back in 1993, for instance, CIA agent Fred Woodruff was assassinated by unknown assailants outside of Tbilisi. “Spokesmen for the State Department and the C.I.A. declined to confirm that Mr. Woodruff was working for the intelligence agency. But high-ranking Administration officials said he was, adding that he was not spying on Georgian officials but was training Mr. [Eduard] Shevardnadze’s security forces,” the New York Times reported at the time. So tight was the CIA with the former president of Georgia, they engineered the “bloodless” Rose Revolution and pitched him out on his ear.

In the wake of Georgia’s much vaunted — by the U.S. corporate media — “revolution,” the installed government of autocrat Mikheil Saakashvilli wasted little time imposing “democracy” neocon-style, resulting in violent suppression of opposition political rallies. “Georgia was rocked by opposition rallies for six days last November as protesters occupied central Tbilisi demanding Saakashvili’s resignation over allegations of corruption and increasing authoritarianism,” reported RIA Novosti. “The Georgian leader responded by sending in riot police to crack down on protesters on November 7. Over 500 people were injured according to Human Rights Watch as police used rubber bullets, tear gas and water cannons to break up the demonstrations.” In addition, Saakashvilli’s goons used “non-lethal” weapons of the sort developed by the Pentagon (see video).

U.S. military holds “exercises” in Georgia immediately prior to conflict

Last month, Aljazeera reported that “a total of around 1,650 soldiers form the US, Georgia and several other East European countries, have begun exercises on the formerly Russian-controlled Vaziani base, the Georgian defense ministry said.”

US officials insist the long-planned wargames have nothing to do with the recent dispute between Russia and Georgia over the breakaway Georgian regions of Abkhazia and South Ossetia. But they give Washington a chance to support pro-west Tbilisi at a critical time.

If you believe this, I have a bridge for sale.

In fact, these “long-planned wargames” were so important the State Department packed up and shipped off Condi Rice to Georgia. Her arrival was nicely timed to coincide with “a deadly firefight between Georgian troops and separatists in a Russian-backed breakaway region…. Ahead of Rice’s arrival, a senior State Department official who did not want to be identified told reporters that unchecked conflict in the region could lead to catastrophe. The official also said Moscow should realize its Soviet empire is gone.”

Israel gets in on the act

Let’s not forget America’s junior partner in chaos and mass murder, Israel. “In addition to the spy drones, Israel has also been supplying Georgia with infantry weapons and electronics for artillery systems, and has helped upgrade Soviet-designed Su-25 ground attack jets assembled in Georgia, according to Koba Liklikadze, an independent military expert based in Tbilisi. Former Israeli generals also serve as advisers to the Georgian military,” reports the International Herald Tribune.

No wonder the horrific photos emerging from South Ossetia have that Lebanon invasion look about them. Israel has over fifty years of experience in invading small countries and has consistently specialized in murdering and tormenting civilians.

Blind eyes all around

As Lavrov explains it, the “Georgian administration has found the use to its arms, which they have been purchasing during the recent several years… We have repeatedly warned that the international community should not turn a blind eye on massive purchases of offensive arms, in which the Georgian administration has been involved during the recent two years.”

Unfortunately, the international community will likely “turn a blind eye” to the U.S. and Israel arming, training, and obviously orchestrating the current conflict, same as they by and large turned a blind eye to Israel’s criminal invasion of Lebanon back in 2005 and the U.S. invasion and ongoing occupation of Iraq. In regard to the latter, the “international community” — indeed, the whole of the American people — are so disorganized and demoralized they cannot address the simple fact the neocons lied a nation into war. Nixon was bounced for far less.

It looks like Russia will be obliged to deal with Georgia’s treachery on its own. Regrettably, Russia’s response will entail even more murder of innocents and wholesale destruction, as this is how government historically deals with threats – real, imagined, or provocateured. 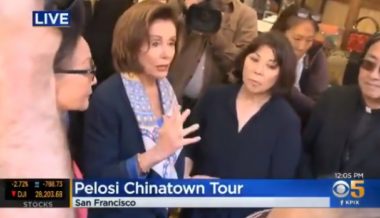 University Of Wisconsin: Claiming Coronavirus Is From China Is “Racist”