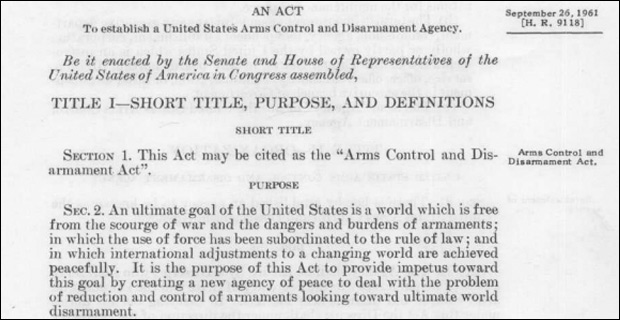 Public law 87-297, the Arms Control and Disarmament Act signed by President Kennedy in 1961, provides an impetus to not only ban civilian firearm ownership but to also transfer control of the U.S. military to the United Nations.

“It is the purpose of this Act to provide impetus toward this goal by creating a new agency of peace to deal with the problem of reduction and control of armaments looking toward ultimate world disarmament,” the law states.

The law was based primarily on State Department Publication 7277, The United States Program for General and Complete Disarmament in a Peaceful World, which advocates the complete disarmament of every country in favor of a permanent U.N. military force:

The over-all goal of the United States is a free, secure, and peaceful world of independent states adhering to common standards of justice and international conduct and subjecting the use of force to the rule of law; a world which has achieved general and complete disarmament under effective international control; and a world in which adjustment to change takes place in accordance with the principles of the United Nations.

In order to make possible the achievement of that goal, the program sets forth the following specific objectives toward which nations should direct their efforts:

Since public law 87-297 was enacted, just about every president has worked to enact its provisions, including President Obama who signed a U.N. arms trade treaty which was rejected by the Senate.

“The right to own, buy, sell, trade, or transfer all means of armed resistance, including handguns, is denied to civilians by [Article 2] of the Arms Trade Treaty,” wrote Joe Wolverton II of the New American. “Article 3 places the ‘ammunition/munitions fired, launched or delivered by the conventional arms covered under Article 2’ within the scope of the treaty’s prohibitions, as well.”