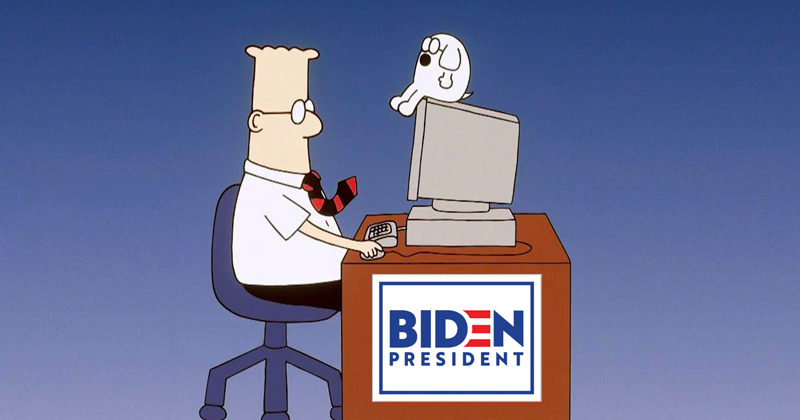 “Today I announce my endorsement of Joe Biden for President of the United States in order to protect myself from racist Democrats,’ the lecturer and author wrote on Twitter Tuesday.

Today I announce my endorsement of Joe Biden for President of the United States in order to protect myself from racist Democrats.

“So I am going to fully endorse Joe Biden… I don’t expect this will have any influence on anybody’s votes,” Adams stated, noting he does not vote, or identify as a member of any political party.

“But if it makes me safer, during this violent revolution that we seem to be seeing here, I endorse Joe Biden.”

The “violent revolution” mentioned likely refers to the recent riots in major cities across America, where Antifa agitators and communist provocateurs in coordination with violent Black Lives Matter protesters looted and burned businesses in the name of social justice.

Pitching a hypothetical scenario where his endorsement of Biden might come in handy, Adams described an angry anti-Trump mob coming to his home:

“Angry mob comes to my house, and I say, ‘Why are you here bothering me? I endorse Joe Biden.’ And they say, ‘Did you? I don’t think you did. You’re always saying good things about Trump.’ And I say, ‘Check my Twitter. There it is. Boom.’”

Responding to a livestream commenter who called him a “coward,” Adams referenced advice from his mother who taught him there was a fine line between bravery and stupidity.

“I would rather be smart and alive than very brave and stupid and dumb and dead, so we all get to choose,” Adams noted.

Adams’ support of a Democrat for president is similar to his endorsement of Hillary Clinton in 2016, where he said he did so for his personal safety because Dems had managed to equate Trump with Hitler, and essentially made it OK to kill Trump supporters.

“Trump supporters don’t have any bad feelings about patriotic Americans such as myself, so I’ll be safe from that crowd,” Adams explained on his personal blog, adding, “But Clinton supporters have convinced me – and here I am being 100% serious – that my safety is at risk if I am seen as supportive of Trump. So I’m taking the safe way out and endorsing Hillary Clinton for president.”