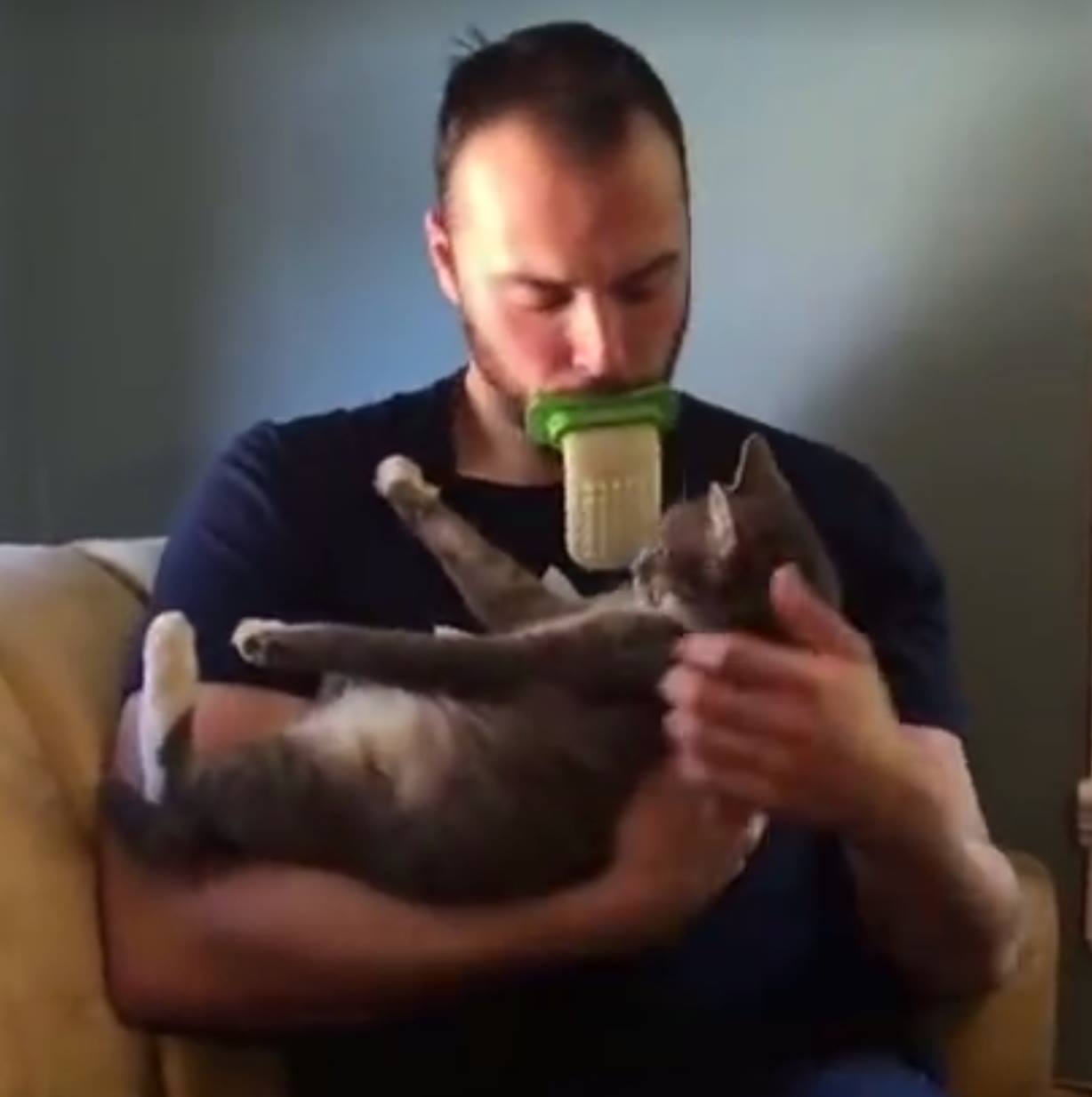 Reality TV star Mike Rowe compared Donald Trump’s triumphant rise to the success of his own Discovery Channel show “Dirty Jobs” after a woman sought his advice on the outcome of the election.

Hey Mike. You’ve been very quiet. Everything OK? I just wanted you to know that I voted for you. I was also hoping you might explain what the hell happened on Tuesday, and say something to make me feel better about my fellow man. Thanks,

In his unique manner, Rowe explained: “The entire country it seems, has been preoccupied with finding a way to lick a cat without actually putting their tongue on it.”

Last Friday, my dog posted a video that featured a man licking a cat with the aid of a device that’s designed for the specific purpose of making it easier for people to lick their cats. I’ve been silent ever since, because frankly, I couldn’t think of a better way – metaphorical or otherwise – to express my feelings about this election cycle. The entire country it seems, has been preoccupied with finding a way to lick a cat without actually putting their tongue on it.

Too oblique? Too weird? Ok, how about this analysis:

Back in 2003, a very unusual TV pilot called Dirty Jobs, Forrest-Gumped its way onto The Discovery Channel and found an audience – a big one. For Discovery, this was a problem. You see, Dirty Jobs didn’t look like anything else on their channel. It wasn’t pretty or careful. It took place in sewers and septic tanks, and featured a subversive host in close contact with his 8-year old inner child who refused to do second takes. Everyone agreed that Dirty Jobs was totally “off-brand” and completely inappropriate for Discovery. Everyone but the viewers. The ratings were just too big to ignore, so the pilot got a green-light, and yours truly finally got a steady gig.

But here’s the thing – Dirty Jobs didn’t resonate because the host was incredibly charming. It wasn’t a hit because it was gross, or irreverent, or funny, or silly, or smart, or terribly clever. Dirty Jobs succeeded because it was authentic. It spoke directly and candidly to a big chunk of the country that non-fiction networks had been completely ignoring. In a very simple way, Dirty Jobs said “Hey – we can see you,” to millions of regular people who had started to feel invisible. Ultimately, that’s why Dirty Jobs ran for eight seasons. And today, that’s also why Donald Trump is the President of the United States.

I know people are freaked out, Carol. I get it. I’m worried too. But not because of who we elected. We’ve survived 44 Presidents, and we’ll survive this one too. I’m worried because millions of people now seem to believe that Trump supporters are racist, xenophobic, and uneducated misogynists. I’m worried because despising our candidates publicly is very different than despising the people who vote for them.

Last week, three old friends – people I’ve known for years – each requested to be “unfriended” by anyone who planned on voting for Trump. Honestly, that was disheartening. Who tosses away a friendship over an election? Are my friends turning into those mind-numbingly arrogant celebrities who threaten to move to another country if their candidate doesn’t win? Are my friends now convinced that people they’ve known for years who happen to disagree with them politically are not merely mistaken – but evil, and no longer worthy of their friendship?

For what it’s worth, Carol, I don’t think Donald Trump won by tapping into America’s “racist underbelly,” and I don’t think Hillary lost because she’s a woman. I think a majority of people who voted in this election did so in spite of their many misgivings about the character of both candidates. That’s why it’s very dangerous to argue that Clinton supporters condone lying under oath and obstructing justice. Just as it’s equally dangerous to suggest a Trump supporter condones gross generalizations about foreigners and women.

These two candidates were the choices we gave ourselves, and each came with a heaping helping of vulgarity and impropriety. Yeah, it was dirty job for sure, but the winner was NOT decided by a racist and craven nation – it was decided by millions of disgusted Americans desperate for real change. The people did not want a politician. The people wanted to be seen. Donald Trump convinced those people that he could see them. Hillary Clinton did not.

As for me, I’m flattered by your support, but grateful that your vote was not enough to push me over the top. However, when the dust settles, and The White House gets a new tenant, I’ll make the same offer to President Trump that I did to President Obama – to assist as best I can in any attempt to reinvigorate the skilled trades, and shine a light on millions of good jobs that no one seems excited about pursuing. http://bit.ly/2fG1SxI

Like those 3 million “shovel ready” jobs we heard so much about eight years ago, the kind of recovery that Donald Trump is promising will require a workforce that’s properly trained and sufficiently enthused about the opportunities at hand. At the moment, we do not have that work force in place. What we do have, are tens of millions of capable people who have simply stopped looking for work, and millions of available jobs that no one aspires to do. That’s the skills gap, and it’s gotta close. If mikeroweWORKS can help, we’re standing by.

If not, I suppose we’ll just have to find another way to lick the cat.