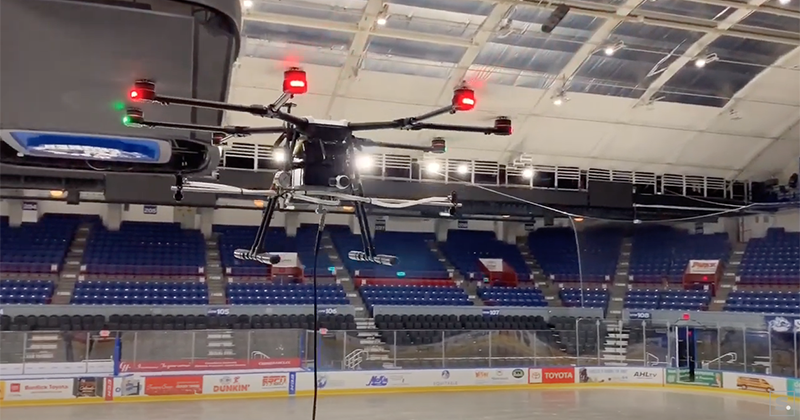 A startup in New York must be closely watching the response efforts seen in Asia and Europe because any country decimated by the virus tends to deploy an army of robot drones with sprayer devices to disinfect public areas.

These drones have been seen in China, South Korea, Italy, Spain, Germany, and will be shortly coming to the US.

Syracuse-based EagleHawk One, Inc. has joined the battle against coronavirus and mounted a sprayer device on one of its drones to disinfectant stadiums, a move the company believes could support efforts in reopening America.

“As a team, we just kind of took a step back and said, ‘How can we help be part of the solution going forward with COVID-19,'” CEO Patrick Walsh told local newspaper Syracuse, indicating that his company has been gearing up in the last several months to fight the virus with technology.

Walsh’s drones are a variant of the ones seen overseas. In China, many of the drones we observed had sprayer devices completely contained underneath the belly of the drone, with a 5-8 gallon container of disinfectant. EagleHawk One’s have the disinfectant stored on the ground and is pumped to the drone through a hose. A second drone flies near the disinfecting drone to hold the hose and prevent it from getting tangled on seats or other objects.

Walsh said the disinfecting drone could cover a large stadium, outdoor public area, and or other indoor facilities. He said his company is trying to market the system to colleges, sports teams, and minor leagues so they can safely reopen facilities.

“We’re getting strong interest now, but I think everybody’s in a waiting game, unfortunately,” he said.

The company has tested the disinfecting system at several stadiums, including KeyBank Center in Buffalo, Sahlen Field in Buffalo, and Oncenter War Memorial Arena in Syracuse.

Walsh said using drones to disinfect thousands of seats is a much better solution than employing dozens of workers on the ground — this is cost-cutting and time-savings, he added.

“Say you have a hockey game at the War Memorial,” he said. “We would come out that evening or the next morning, do the cleaning and have it ready to go for the next day,” he said.

He also said spraying with drones is much safer than having workers manually disinfect each seat.

“Now, people won’t be directly exposed,” said Walsh. “The drone will do the job.”

And with Major League Baseball owners proposing to start games in July – EagleHawk One’s drones could be the perfect solution to reopen stadiums. After all, life is boring as hell without sports.