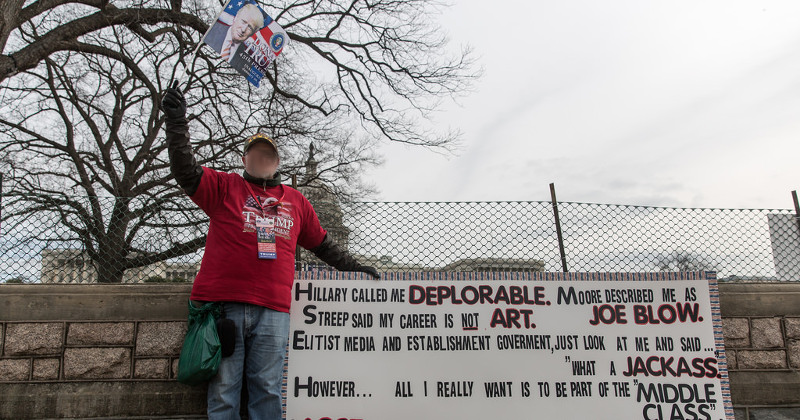 A listener to WMAL in Washington D.C. broke down emotionally during a call in which he excoriated the #FakeNews media’s obsession with Russian conspiracy theories while hard-working Americans continue to sink under the weight of globalism and Obama-era policies.

Host Larry O’Connor had covered the latest news regarding Donald Trump Jr.’s meeting with Russian lawyer Natalia Veselnitskaya, and asked his audience to weigh in with their opinions on the matter when “Allen in southern Maryland” unloaded on the elitist mainstream media, along with leftists and RINOs ‘resisting’ President Trump’s efforts to rescue the US economy and its workers.

“I’m sick of the Donald Trump stuff, all the Trump stuff,” began Allen. “I consider myself one of the forgotten men and women.”

“I’m worried about job creation. I’m worried about tax cuts. I need more money. I’m living paycheck to paycheck. They just cut off my cable bill. I’m rubbing two nickles together. My girl can’t find a job to help me.”

“We’re out here struggling and these people don’t get it,” he continued, choking up with evident anguish. “I mean they really don’t get it. I don’t have money. I mean, I’m cutting back on my medicine, my groceries. She can’t find a job…”

“Allen, do you feel like the President is keeping his head down and doing what he promised to do to try to help you and other Americans like you?” asked O’Connor.

“If they let him do it and give him a chance – they are fighting him every step of the way,” responded Allen. “We need help out here.”

“We’ve been struggling for years under Obama and [Trump] had the right message. We voted him in because of that.”

“We need tax cuts. I need a couple of extra dollars on my paycheck every week. We need jobs,” Allen continued. “We need Trump and these liberals, the press and all this to get off that and think about us that’s out here putting our boots on everyday, getting up at four o’clock in the morning, going to work and trying to provide for our families, and it’s hard.”

Allen’s pain was felt directly by the White House, as Sebastian Gorka, deputy assistant to President Trump and expert MSM destroyer, posted the man’s call to social media – yet another indicator that the Trump administration is fully aware of the dire plight facing everyday Americans, and is working to overcome the hurdles set forth by the vast anti-Trump coalition.

"We've been struggling for years under Obama."

In the month of June, the US added 222,000 nonfarm jobs, far exceeding expectations of 179,000 set forth by mainstream economists.

Also in June, the US opened its “first new coal mine in recent memory” in Pennsylvania, signaling a major shift of momentum in the nation’s energy sector, which suffered heavily under Obama-era regulations – damage which Trump is undoing as quickly as possible.