For months now, the embattled regime of US-backed dictator Thaksin Shinawatra and his proxy political machine led by his nepotist-appointed sister, Yingluck Shinawatra, have floated the idea of retreating to the north of Thailand and establishing a new capital from which to rule.

Despite intense propaganda campaigns to establish this narrative, the regime’s tenuous political holdings and crumbling support base makes it all but impossible. 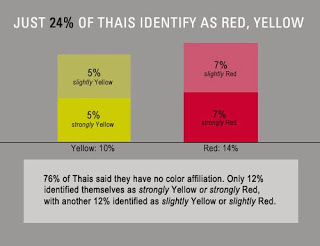 It was in 2010 that the Asia Foundation conducted its “national public perception surveys of the Thai electorate,” (2010’s full .pdf here). In a summary report  titled, “Survey Findings Challenge Notion of a Divided Thailand.” It summarized the popular misconception of a “divided” Thailand by stating:

“Since Thailand’s color politics began pitting the People’s Alliance for Democracy’s (PAD) “Yellow-Shirt” movement against the National United Front of Democracy Against Dictatorship’s (UDD) “Red-Shirt” movement, political watchers have insisted that the Thai people are bitterly divided in their loyalties to rival political factions.”

The survey, conducted over the course of late 2010 and involving 1,500 individuals, revealed however, a meager 7% of Thailand’s population identified themselves as being “red” Thaksin supporters, with another 7% identifying themselves only as “leaning toward red.”

In 2011, a mere 35% of all eligible voters cast ballots for the Shinawatra regime. Of all that actually voted, the regime failed to acquire even a popular majority. Since 2011, it has stumbled from one blunder to the next, from mishandling two seasons of flooding, to the unraveling of several unsustainable, ill-conceived “populist” policies, including a rice subsidy that has collapsed over half a year ago leaving farmers – once stalwart supporters of the regime – destitute, desperate, and joining ongoing anti-regime protests in growing numbers.

Sham-elections held last month on February 2, 2014 resulted in over half of the voting public boycotting them. Of those that did show up to vote, many elected to deface their ballots or check “no vote” in a display of defiance.

Unable to govern in Bangkok, Yingluck Shinawtra and her minders have been on the move, receiving harassment even in the north – once considered their unassailable stronghold. The likelihood of the regime being able to establish an alternative “capital” is slim to none – with voter turnout in February even in Shinawatra “strongholds” at all time lows.

A civil war requires a divided nation. In Thailand today, the nation appears to be more united than ever – against Thaksin Shinawatra and his crumbling political machine. Recently, the regime’s deputy secretary-general to the prime minister and “red-shirt” leader Suporn Attawong claimed he was assembling a 600,000-strong “pro-government Democracy Protection Volunteers Group,” as reported by the Bangkok Post’s article, “Red shirt hardliner seeks 600,000 men.” With the regime failing utterly to fill even a single stadium in Bangkok to counter massive and prolonged anti-regime protests, the prospect of assembling an able-bodied army of 600,000 men is absurd.

These are the last gasps of a desperate regime backed by foreign interests who have nothing to lose by continuing to push on, no matter what the odds. While the prospects of large “red armies” and “civil war” are used to inspire fear and despair across the growing number of Thaksin Shinawatra’s opponents, at most, “hardline” supporters of the regime number a few thousand and would be easily overwhelmed by Thailand’s formidable military.

What is likely to happen instead (and has already to a degree unfolded already), is a large scale terror campaign dressed up as a “popular uprising,” in hopes of being spun long  enough to allow the ousted regime to seek political recognition and perhaps even protection from its Western backers. But even this would appear to be a gamble as the regime stumbles over its own incompetence to a greater degree each day – and with a respected national military most likely well aware of the plan and fully prepared to disrupt it.