Dated for May of 2016, the email thread begins with Freundlich stating how “digital created a fake craigslist jobs post for women who want to apply to jobs one of Trump’s organizations.”

“Since we will be pitching this, need your approval please,” Freundlich inquires.

Included in the email is the proposed craigslist ad itself, which seeks “staff members for multiple positions in a large, New York-based corporation known for its real estate investments, fake universities, steaks, and wine.” 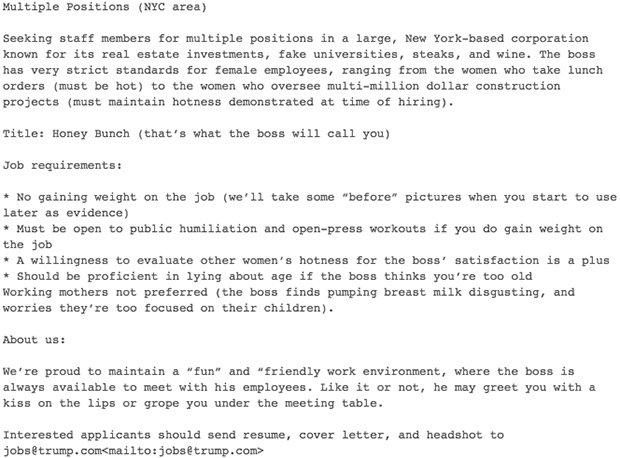 “The boss has very strict standards for female employees, ranging from the women who take lunch orders (must be hot) to the women who oversee multi-million dollar construction projects (must maintain hotness demonstrated at time of hiring),” the ad continues.

Prospective female hirees, whose title is listed as “Honey Bunch,” are required not to gain weight during their employment and must show a “willingness to evaluate other women’s hotness for the boss’ satisfaction.”

“Should be proficient in lying about age if the boss thinks you’re too old,” another requirement states.

“We’re proud to maintain a ‘fun’ and “friendly work environment, where the boss is always available to meet with his employees,” the ad states in closing.” Like it or not, he may greet you with a kiss on the lips or grope you under the meeting table.”

Those interested in the position are asked to send a “resume, cover letter, and headshot” to the “[email protected]” email address.

After receiving the proposal, Communications Director Luis Miranda approved the ad so long as “all the offensive shit is verbatim.”

While the emails may raise questions on the DNC’s tactics, the overt language of the ad itself suggests staffers did not intend to make the listing appear legitimate in any way. Whether the ad indicates an attempt to openly mock Trump or simply reveals the boredom of Democratic Party employees remains to be seen.

The more than 19,000 emails are believed to have been provided to Wikileaks by “Guccifer 2.0,” an alleged idealistic hacker – Although cybersecurity experts believe the hacker is actually a smoke screen to divert attention away from the Russian government’s role in the breach.