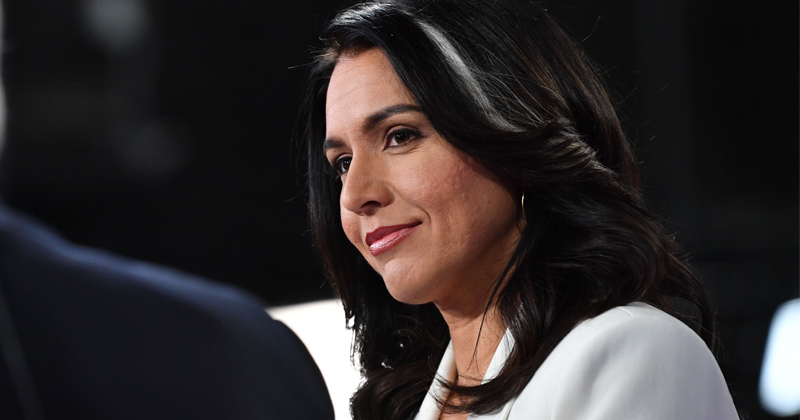 The DNC has changed the qualifying threshold for the next Democratic primary debate, supposedly targeting no one specifically, but ensuring Tulsi Gabbard – the last remaining woman and person of color in the race – is excluded.

DNC announced the rule change on Friday, requiring candidates for the upcoming debate in Arizona later this month to rack up 20 percent of convention delegates to qualify.

While Gabbard had met the previous threshold, having won two delegates in American Samoa on Super Tuesday, the new standard guarantees that she will not make the cut – a move that was blasted far and wide across social media.

Way to go Dems. Eliminate the only woman left. For no good reason, other than that you don’t like her and she’s honest/not beholden to your power structures. @TulsiGabbard deserves better, and y’all should be ashamed. https://t.co/HybHgsOCrC

Must be at least one of these 3 things:
White
Male
Over 70 years old

Sorry if that excludes anyone specifically.

You’re telling me that’s not the requirements imposed?

Well what’s the difference in the end result from their chosen criteria? https://t.co/IReabAbyDa

Tulsi would make both of them look really bad. Gotta give her the axe. DNC can’t have that.

The party’s move is not entirely unexpected, as on the very night Gabbard passed the previous threshold a DNC spokesperson said there would be stricter standards that “reflect where we are in the race.”

Supporters of the Hawaii congresswoman and anti-war stalwart weren’t buying it, however, pointing out the convenient timing of the decision.

So, let me get this straight? You arbitrarily changed rules to allow Bloomberg into the debates, and now you will change them again to keep Tulsi out? Right on cue. #DNCisCorrupt #LetTulsiSpeak

Though Gabbard still has a chance to win additional delegates before the March 15 cutoff – with voters heading to the polls in six states next Tuesday, including delegate-rich Michigan – she is unlikely to meet the 20 percent threshold, currently polling at under 2 percent on average, according to Real Clear Politics.

You have just witnessed the Dem Party, the same entity that paints itself as the “party of inclusivity”, make their last great attempt to erase the LAST woman of color in the race, after pretending that losing Warren was a blow to “feminists”. F*** the DNC & ur fake “diversity” https://t.co/D1hUFhqlPr

An earlier overhaul of the rules in January eliminated an individual donor requirement – a common measure of grassroots support – allowing billionaire media mogul Michael Bloomberg to easily qualify for subsequent debates despite not even being on the ballot in many states.

Bloomberg spent hundreds of millions to saturate the airwaves with campaign ads, only to drop out of the race after a dismal showing on Super Tuesday.

Action 7 attends Tulsi Gabbard’s rally in Austin, TX where Savanah gets to ask Tulsi the question we’ve all been wondering, why is Tulsi still in the running and how does she expect to win?