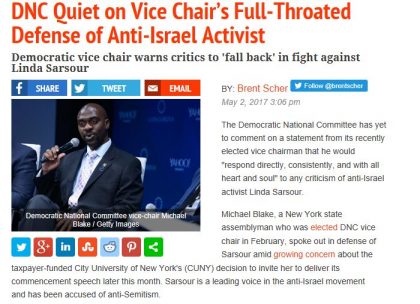 The Democratic National Committee has yet to respond to recent comments by its newly elected vice chairman defending a Sharia law advocate who is reportedly linked to the terrorist organization Hamas.

Michael Blake, the new vice chairman and a New York State Assemblyman, vowed to “respond directly, consistently, and with all heart and soul” to any criticism of pro-Sharia advocate Linda Sarsour, who is set to deliver a commencement address to the City University of New York (CUNY) later this month.

Making it real clear. If you keep coming after @lsarsour, we're going to respond directly, consistently, with all heart & soul.
Fall back!

It is unclear if Blake’s comments represented his own personal views or those of the DNC, as neither Blake nor any representative from the DNC have responded to requests for comment. 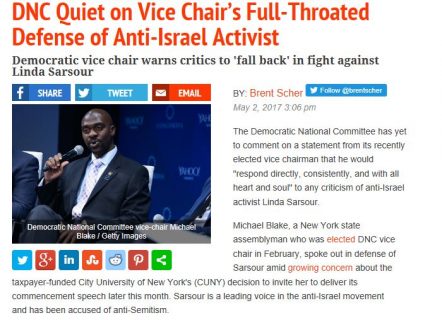 Blake is not the only politician from New York offering praise for Sarsour; New York Senator Kirsten Gillibrand called Sarsour one of the “suffragists of our time” in a piece for Time magazine last month.

Senator Gillibrand’s support for Sarsour is notable given that just weeks earlier, Sarsour shared a stage with Rasmea Odeh, a convicted terrorist involved in a bombing in Tel Aviv in 1969 that left two students dead; Odeh was convicted of providing fraudulent information on her visa application when she entered the United States over 20 years ago, and is set to be deported.

While attending the 15th annual convention of the Muslim American Society and Islamic Circle of North America, Linda Sarsour was photographed alongside Salah Sarsour, a member of the Islamic Society of Milwaukee and former Hamas operative who was jailed in Israel because of his ties to the terrorist group.

While she has refused to confirm if Salah and herself are related, other members of her family have been arrested for providing support for Hamas.

The far-left Southern Poverty Law Center (SPLC) vigorously defended Sarsour amid criticism of her role organizing a Women’s March in January given her history of supporting Sharia law.

Islamophobes have been attacking #WomensMarch organizer @lsarsour. We stand with her against this type of hate and bigotry. #IMarchWithLinda

“The Democratic Party, to a great extent, is committing suicide,” he said. “When you don’t do the right thing in reaction to the Linda Sarsours of the world, then you are no better than Linda Sarsour.”

“Linda Sarsour has a soft spot for terrorists; it’s plain and simple,” Hikind added. “Her remark recently that you can’t be a feminist if you support Israel, why isn’t everybody yelling about this? That’s outrageous.”