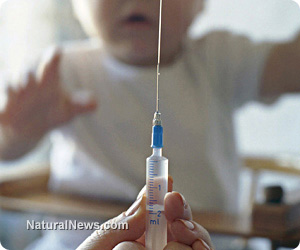 There is systematic suppression in the United States on the truth about the links between vaccines and autism. Drug companies and the federal government have conspired to deny parents of vaccine-damaged children their day in court by creating a kangaroo “vaccine court” that offers no due process whatsoever (and therefore violates the civil liberties of Americans).

Even so, this court has, numerous times, admitted that vaccines have irrefutably damaged children and caused autism. Parents of those children are offered “hush money” to quietly go away after signing an agreement that mandates they never talk to the press about their ordeal.

This systematic suppression of the truth about vaccine-damaged children is revealed in a must-see new video just released by the Canary Party (www.CanaryParty.org) and narrated by actor Rob Schneider, an outspoken advocate of parental rights when it comes to medicine.

I urge you to share this video with everyone you know! It explains, in clear, rational language, an important part of the true story of how the vaccine industry suppresses the truth about vaccine-damaged children.

Brought to you by the Canary Party

The Canary Party is a fast-growing movement of parents, doctors, scientists and everyday citizens who want to put a stop to the systematic poisoning of the population by drug companies, vaccine manufacturers and other corporate pushers of toxic substances that damage humankind (and the planet).

Click here to read the position paper of the Canary Party. You’ll find that it is based on the scientific “precautionary principle” as well as fundamental parental rights and individual responsibilities. In summary, the Canary Party seeks to reveal the truth about how we are all being poisoned by unethical corporations and then find constructive ways to stop the poisoning and end the human suffering caused by it.

Regular readers of NaturalNews will find these principles to be quite familiar, as we share these same goals. I plan to work with the Canary Party in the near future to find other ways we can help support their cause for humanity.

If you wish to join the Canary Party, sign up here:
http://canaryparty.net/index.php/join-us

And if you’d like to help financially support the Canary Party’s efforts, donate at:
http://canaryparty.net/index.php/donate

Why do vaccines harm children?

The entire vaccine industry — including all its bought-and-paid-for doctors, authors, “scientists” and PR flaks — has for decades knowingly lied to the world in claiming that vaccines have “zero risk” and “zero side effects.”

In truth, even the CDC still admits that vaccines contain four additives, each of which is a potent neurotoxic chemical. Those additives include:

All of these substances are toxic to human biology when injected. There is no rational doctor or scientist in the world who can say they believe injecting infants and children with mercury, formaldehyde, MSG and aluminum is somehow “safe,” yet doctors inject children with these substances every single day in the form of vaccines.

Just as the dental industry has for decades ridiculously denied the toxicity of mercury in dental fillings, the vaccine industry is also living in delusional state of total denial about the toxicity of mercury. What we are witnessing today with modern medicine is a vaccine holocaust that is killing and maiming our children in record numbers. And the “circle the wagons” strategy of suppressing all the scientific evidence to support this makes Big Pharma look even worse than Big Tobacco.

At what point will autism reach 1 in 10 children? It’s not that far off (it’s already over 1 in 100 children born today). If this level of disease were caused by anything other than vaccines, the CDC would have long declared it an epidemic and tried to push a vaccine for it. But because autism is linked to vaccines and mercury, the CDC downplays it and ridiculously pretends children aren’t being harmed. The FDA plays the same game of denial, hoping no one will notice as the condition multiplies to the point where one day potentially every fifth child in America will be autistic after receiving the hundreds of “required” vaccines that will be mandated in the near future.

We are talking about the downfall of a nation here, folks. If this vaccine holocaust is not stopped, America will not survive. No nation can survive the collapse in the health of its citizens. Injecting mercury into the population of America is just as idiotic as feeding the citizens of Rome drinking water laced with lead. Many historians say the lead poisoning of the citizens of Rome exacerbated its downfall. Today, vaccines are strongly contributing to the same sort of downfall of modern civilization.

To learn more on this issue, read my list of 10 startling facts about vaccines the CDC and the vaccine industry don’t want you to know.

Sources for this article include
http://www.naturalnews.com/041897_MMR_vaccin…