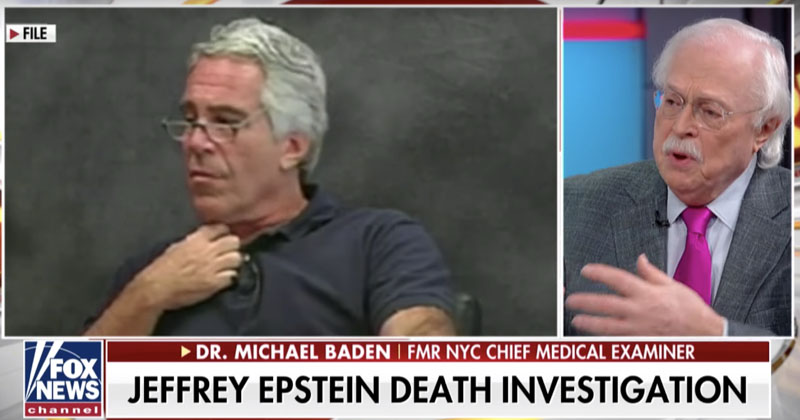 The body of billionaire pedophile Jeffrey Epstein, who was found dead in his cell in August, revealed telltale signs of homicide despite an official finding of suicide, according to pathologist Dr. Michael Baden.

During an appearance on Fox & Friends, Baden, a former New York City medical examiner who observed Epstein’s autopsy at the direction of brother Mark Epstein, said he believes the findings are more consistent with signs of strangulation than suicidal hanging.

“The prominent hemorrhage in the soft tissues of the neck next to the fractures is evidence of a fresh neck compression that could have caused the death,” Baden told Fox News on Wednesday.

“Those three fractures are extremely unusual in suicidal hangings and could occur much more commonly in homicidal strangulation.”

“I’ve not seen in 50 years where that occurred in a suicidal hanging case,” the 85-year-old medical examiner added.

Baden, who’s examined more than 20,000 bodies and hosted HBO’s “Autopsy,” explained that if a person weighed 120 pounds and their head weighed 10 pounds, there would be 110 pounds of pressure on the neck at the jaw during a hanging. But, if someone put a hand around a person’s neck and squeezed, that could double or even triple the pressure on the neck, Baden said.

The ligature, or item used to tie something tightly, allegedly was made from a sheet that had been twisted and put around Epstein’s neck, Baden said. Evidence on the cloth material could help prove whether or not someone else was involved in Epstein’s death.

“Whoever it is would have their DNA all over the ligature. We don’t have those results yet,” Baden said, adding those results “should be reported quickly to give an idea and lessen the speculation.”

Epstein, a well-connected financier and convicted pedophile, was found dead in his New York jail cell on August 9th despite being on 24/7 suicide watch which was later abruptly called off.

Nearby prisoners say they heard “shrieking and shouting” coming from Epstein’s cell the morning he died, CBS reported.

Notably, Epstein certified his will just two days before his death.

If the highly questionable suicide of Jeffrey Epstein had happened in another country, we would all be laughing at how corrupt that Country is. Instead, those countries are laughing at us. Jeffrey Epstein, the elite’s pedophile pimp is dead, something everyone saw coming a mile away, including Epstein himself.