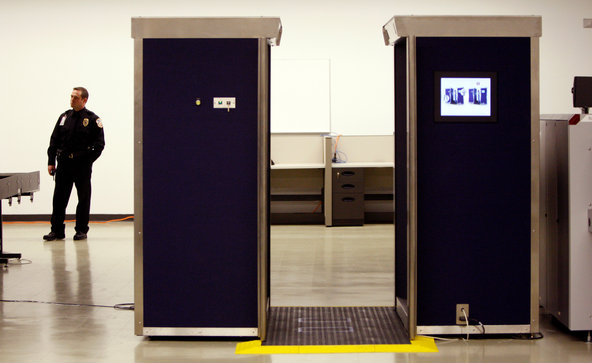 An article in the New York Times health and science section today carries several revealing details indicating that doctors and scientists are extremely wary of the TSA’s use of full-body “backscatter” X-ray scanners.

The article details an account from pregnant Yolanda Marin-Czachor, a 34-year-old mother and teacher from Green Bay, Wis., who says:

“one of the first things my doctor said was: ‘Do not go through one of those machines. There have not been any long-term studies. I would prefer you stay away from it.’ ”

Explaining that the machines operate a narrowly focused beam of high-intensity radiation very quickly across the body, the article also notes:

David Brenner, director of the Center for Radiological Research at Columbia University Medical Center, says he worries about mechanical malfunctions that could cause the beam to stop in one place for even a few seconds, resulting in greater radiation exposure.

John Sedat, emeritus professor of biochemistry and biophysics at the University of California, San Francisco, believes that the effective dose could be 45 times as high as the T.S.A. has estimated, equivalent to about 10 percent of a single chest X-ray.

Scrutiny over radiation exposure was heightened recently following apparent efforts by the TSA to cover-up a “cluster” of cancer cases amongst scanner operators at Boston-Logan airport. According to FOIA documents obtained by the Electronic Privacy Information Center (EPIC), when Union representatives in Boston discovered a “cancer cluster” amongst TSA workers linked with radiation from the body scanners, the TSA sought to downplay the matter and refused to issue employees with dosimeters to measure levels of exposure.

In addition, further documents obtained by EPIC show how the TSA “publicly mischaracterized” findings of the National Institute of Standards and Technology (NIST), in stating that the agency had positively confirmed the safety of full body scanners in tests.

Numerous other studies conducted by prestigious universities and health authorities, including Columbia University, the University of California, and the Inter-Agency Committee on Radiation Safety, have warned that the devices will lead to an increase in cancers.

Despite the fact that almost every independent study has concluded that the machines will cause cancer cases to increase, the TSA still routinely denies the threat.

Back in June, a study that on the surface appeared to be independent, claimed that there are no safety concerns regarding radiation firing body scanners used by the TSA in the nation’s airports. However, a cursory review of the details revealed that the research was based purely on old data that was released by the federal agency itself.

The LA Times reported that the study, conducted by assistant professor of biomedical engineering Taly Gilat Schmidt of the Marquette University College of Engineering, found that the scanners “do not expose passengers to dangerous levels of radiation.”

The report noted that Schmidt’s “new independent analysis”, published in the Medical Physics journal last month, found that “the radiation levels are considerably lower than those of other X-ray procedures such as mammograms.”

However, even the LA Times report itself admitted that, once again, no independent testing of the body scanners was undertaken.

As the report notes, “Schmidt, did not test the actual machines. Instead, she based her conclusions on scanner radiation data released publicly by the TSA.”

This was not the first time that old data had been presented to justify the continued use of the scanners.

In February, a  government report cited as newly authoritative by TSA head John Pistole, merely repeated old and questionable information that had been available on the TSA’s website for two years.

The report (PDF), by The Department of Homeland Security’s Inspector General, concluded that each backscatter radiation machine being used by the TSA “delivers an extremely low dose of ionizing radiation” with levels “below the acceptable limits”.

“Specifically, to reach annual radiation dose limits, a passenger would have to receive more than approximately 17,000 screenings in a 12-month period, which is equivalent to approximately 47 screenings per day, 365 days per year.”

However, those claims were drawn from an old Johns Hopkins University assessment dating from August 2010, and use yearly limits of radiation set by the American National Standards Institute.

The figures cited were purely calculations and were not drawn from any scientific evidence. Dozens of radiologists and scientists have warned that decades of research has not established any dose of radiation as safe.

Indeed, even Johns Hopkins scientists have warned that the TSA body scanners will lead to an increase in cancers.

Despite this, and an admission in the DHS report that the body scanners have not been regularly tested to ensure they are calibrated correctly, the TSA said the report vindicated earlier statements that the machines are safe.

In March, The TSA was forced into a promise that it would retest every full-body X-ray scanner after maintenance records on some of the devices showed radiation levels 10 times higher than expected.

As we have also noted, a federal court has ruled that the TSA violated the law by deploying body scanners, and continues to ignore a court order to initiate public hearings on guidelines for the machines.