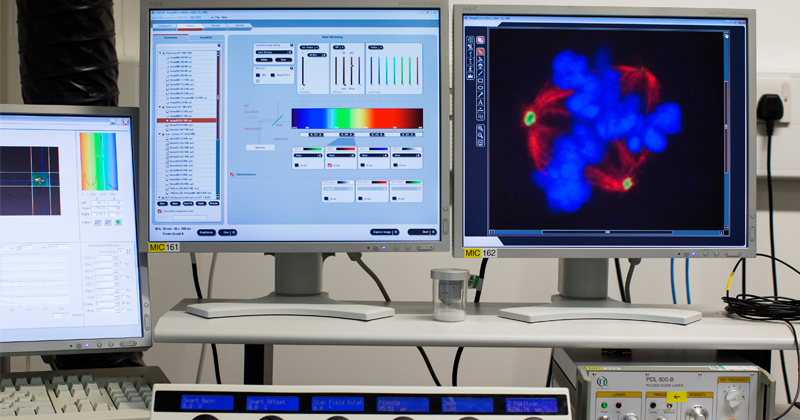 The spatial distribution of different types of cells can reveal a cancer’s growth pattern, its relationship with the surrounding microenvironment, and the body’s immune response. But the process of manually identifying all the cells in a pathology slide is extremely labor-intensive and error-prone.

“As there are usually millions of cells in a tissue sample, a pathologist can only analyze so many slides in a day. To make a diagnosis, pathologists usually only examine several ‘representative’ regions in detail, rather than the whole slide. However, some important details could be missed by this approach,” said Dr. Guanghua “Andy” Xiao, corresponding author of a study published in EBioMedicine and Professor of Population and Data Sciences at UT Southwestern.

The human brain, Dr. Xiao added, is not good at picking up subtle morphological patterns. Therefore, a major technical challenge in systematically studying the tumor microenvironment is how to automatically classify different types of cells and quantify their spatial distributions, he said.

Here’s how it works: The ConvPath algorithm can “look” at cells and identify their types based on their appearance in the pathology images using an AI algorithm that learns from human pathologists. This algorithm effectively converts a pathology image into a “map” that displays the spatial distributions and interactions of tumor cells, stromal cells (i.e., the connective tissue cells), and lymphocytes (i.e., the white blood cells) in tumor tissue.

Whether tumor cells cluster well together or spread into stromal lymph nodes is a factor revealing the body’s immune response. So knowing that information can help doctors customize treatment plans and pinpoint the right immunotherapy.

Ultimately, the algorithm helps pathologists obtain the most accurate cancer cell analysis – in a much faster way.

“It is time-consuming and difficult for pathologists to locate very small tumor regions in tissue images, so this could greatly reduce the time that pathologists need to spend on each image,” said Dr. Xiao, who also has an appointment in the Lyda Hill Department of Bioinformatics and is a member of both the Quantitative Biomedical Research Center (QBRC) and the Harold C. Simmons Comprehensive Cancer Center at UTSW.