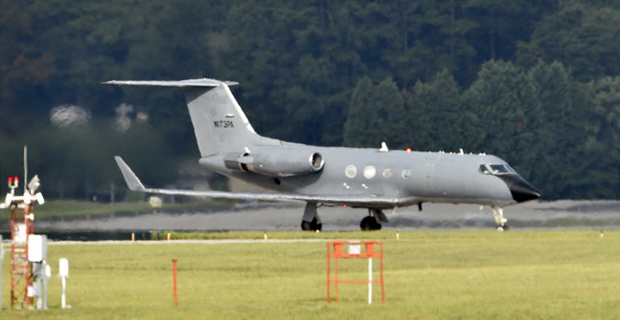 The US Defense Department will only have the capability to fly four service members out of Africa per week should they contract the deadly Ebola virus, a Major General said at a meeting today regarding the military’s response to the epidemic.

Speaking at a House Oversight & Government Reform Committee hearing earlier today, Maj. Gen. James Lariviere told North Carolina Congressman Patrick McHenry that the US plans to have “in the vicinity of 3,000” troops in Africa by the end of the year.

In the above video, Rep. McHenry’s questioning begins around 2:09.

However, in the event that soldiers begin contracting the virus, Maj. Gen. Lariviere admitted the military currently only has one plane capable of transporting symptomatic patients back to the US for treatment.

Rep. McHenry: How many aircraft are outfitted to move these individuals out of country in the event that this happens?

Maj. Gen. Lariviere: So for “controlled movement,” any aircraft can do because, as we pointed out, they’re asymptomatic and not contagious at that point, so any aircraft could do. For present time the only aircraft that can move the symptomatic patients is the State Department’s Phoenix Air contract that you’ve seen moving the other Ebola patients.

Rep. McHenry: And how many patients can that aircraft hold?

Maj. Gen. Lariviere: The aircraft can hold one at a time and can do four movements a week at this point.

Rep. McHenry: Is that sufficient?

Maj. Gen Lariviere: Given the number of Ebola patients the US has had in total at present time, it is sufficient, however…

Rep. McHenry: But that’s not how epidemics work…

Maj. Gen. Lariviere explained that the Defense Department was working on procuring additional aircraft, but wouldn’t be ready to move more soldiers out of Africa until January.

“So at current state, we can take less than 10 people out of country in a week’s time?” Rep. McHenry asks, to which Maj. Gen Lariviere replies, “If they are symptomatic, yeah.”

“So this is not at all sufficient,” Rep. McHenry concludes.

As Rep. McHenry highlights, the fact that the US Military is moving to deploy soldiers to an Ebola hot zone, all the while knowing full well that they are lacking in resources, is simply ludicrous.

“…If we currently have one plane that is controlled by the State Department, I’m asking the DOD, with the mass number of airplanes, equipment and training capacity that we have – spending nearly half a trillion dollars annually in the DOD. If you need it, we will get it. We will demand it because if we’re putting these men and women in harm’s way, potentially where they can contract ebola, the idea that we have one airplane as the United States to get these men and women out of country in a safe manner, if they contract what is absolutely horrible, which we want to control, which we absolutely want to control, the idea that you’re coming before us and giving this type of testimony raises great concerns.”

[…] “We don’t want to put our men and women in harm’s way without any capacity to care for them. Our veterans our fighting men and women deserve the best health care in the world, the best training in the world and they have it, but it means the proper protocols at the top level are there to make sure they’re protected, and if something bad happens, they’re immediately taken out of harm’s way, cared for and returned back to their normal state.”