This article is a dire warning shot to Europe – spotting the harm coming its way, which has already riddled Israel over the last 5 decades, thus serving a precursor to similar abuse heading in Europe’s direction. In that regard, extending beyond our 20.3.2012 article: Spring 2012: the springboard to Global conquest.

Does Wall-Street’s campaign of global destabilization shift now from the Arab-Spring of year 2011 to the European Sting of year 2012?

It now seems more realistic than ever before, that the 80 Billion USD under Stanley Fisher’s (mis)management in the so called “Bank of Israel” are parked in the “Fed” for no interest and thereafter leveraged up to ,say, 3 Trillion USD, with which the “Fed” bank-rolls the FIGSIP (Frogs and PIGSI) further down the road to impoverishment, by means of “default swaps” which smokescreen their desperate need to be declared bankrupt, which is the last resort in order to keep their functional-order going.

About 3/4 of those 80 Billion USD have been collected from the open local markets in exchange for FIAT shekels issued out of thin air, thus achieving several effects:

1. Collecting an underlying treasure, denominated in USD, for the “Fed”
to leverage on,  given the money is raised overseas.

2. Propping up a real-estate bubble in Israel, by means of imported hard currency
which is then converted to Shekels in order to make the actual purchase.
This bubble which makes the local plutocracy richer than ever before – while
enthralling the wider society in an interest serfdom, bound to bring Israel to its
Geopolitical knees like happened during the 1980’s, when following the Banks’
collapse of year 1983, came the “Intifada” where by Israel let the lowest grade of
rioters to tear the country apart and import Globalist machinations of terrorism:
first the Egypt-backed PLO and then the Iran-backed Hamas \ Islamic Jihad.

Money people owned mostly in the western countries during the last housing bubble they experienced, was moved over to the Israeli housing bubble which followed, where those western hard currencies have been collected in the form of USD and transferred to the “Fed” in the USA. This is much of the alleged “reserve” Israel holds and which doesn’t seem to bear interest and which doesn’t contribute to urgent needs like vastly derailed firefighting capacity around the periphery.

It is some 50 years now that Israel (disputed territories included) turn in to an overloaded ecosystem, already quite an ecologic catastrophe, with a population 10 times its available agricultural potential. On the one hand this theoretic shortage in land inspires the propaganda which supports the housing bubble, which has sprung virulently in the years 2007-2010. This happened when the housing bubble in the western world imploded, proving it couldn’t be a participating reflection of the situation in the west.

This ecological disaster suggests what happens to an otherwise balanced modern economy when it is being overwhelmed by mass immigration from 3rd world countries (Arabs and Jews alike), which is initially welcomed as cheap labor – while baring any consideration for the future generations.

The final act on doped Europe

Further to the financial entrapping of Europe, the EU authorities, which answer only to the global money powers, not to any sovereign nation, have decided 30.03.2012 to step up the Eurabian process by means of forcing hundreds of millions of Levantine and Maghreb Muslims on the remains of European nations, 44 years after the cultural-revolution of summer 1968 was engaged, tearing the social fabric at the rims, changing focus from maternity to promiscuity of all sorts. This is no less than a Genocide in broad day light.

This is in an age of robotics, where it makes no economic sense to import cars (lest for countering local cartelization), where the construction industry is since long fully pre-cast and machinated to the last element, and shopping is done online. Likewise, the commercial innovative button shaped driver computer-vision assistant developed in Jerusalem and demonstrating the capacity of many useful things to come soon, which will render low-skilled personnel a dead weight on any society: “Mobileye – Our Vision. Your Safety” . 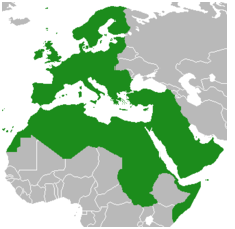 All this doesn’t stop any world power from diluting any of its locals and neighbors, in order to “make room”, i.e. empty out space, for importing in Africans, Arabs & Indians., at an ever growing pace and with ever more perpetual subsidies.