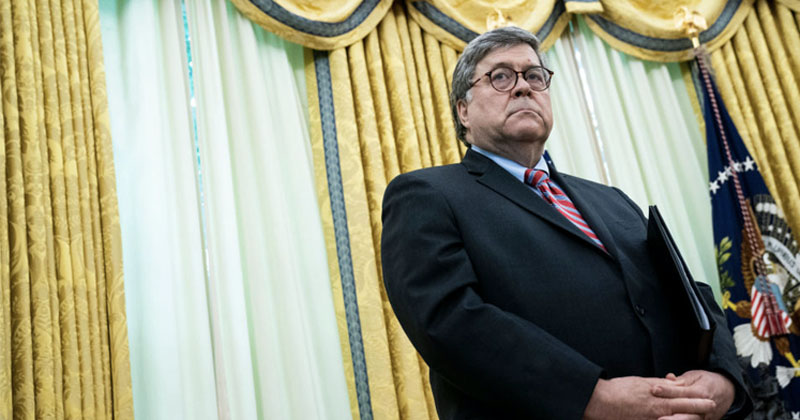 The Department of Justice announced a set of proposals to remove legal protections enjoyed by Big Tech that allows them to behave as both a platform and a publisher.

The department said in a statement Wednesday that its proposals would update Section 230 of the Communications Decency Act of 1996 to include accountability for antitrust violations made by tech companies against users.

“When it comes to issues of public safety, the government is the one who must act on behalf of society at large. Law enforcement cannot delegate our obligations to protect the safety of the American people purely to the judgment of profit-seeking private firms. We must shape the incentives for companies to create a safer environment, which is what Section 230 was originally intended to do,” said Attorney General William Barr in a statement.

“Taken together, these reforms will ensure that Section 230 immunity incentivizes online platforms to be responsible actors. These reforms are targeted at platforms to make certain they are appropriately addressing illegal and exploitive content while continuing to preserve a vibrant, open, and competitive internet.”

“These twin objectives of giving online platforms the freedom to grow and innovate while encouraging them to moderate content responsibly were the core objectives of Section 230 at the outset. The Department’s proposal aims to realize these objectives more fully and clearly in order for Section 230 to better serve the interests of the American people,” he concluded.

Four key areas are identified in the DOJ’s review of Big Tech reform:

1. Incentivizing Online Platforms to Address Illicit Content
The first category of potential reforms is aimed at incentivizing platforms to address the growing amount of illicit content online, while preserving the core of Section 230’s immunity for defamation.

3. Promoting Competition
A third reform proposal is to clarify that federal antitrust claims are not covered by Section 230 immunity. Over time, the avenues for engaging in both online commerce and speech have concentrated in the hands of a few key players. It makes little sense to enable large online platforms (particularly dominant ones) to invoke Section 230 immunity in antitrust cases, where liability is based on harm to competition, not on third-party speech.

4. Promoting Open Discourse and Greater Transparency
A fourth category of potential reforms is intended to clarify the text and original purpose of the statute in order to promote free and open discourse online and encourage greater transparency between platforms and users.

Barr had said in an interview last week that companies like Facebook, Twitter, and Google were “clearly engaging in censorship” and that measures would be taken to address it.

“I think there are — clearly these, these entities are now engaged in censorship,” Barr told Fox News. “And they originally held themselves out as open forums where people, where the third parties could come and express their views and they built up a tremendous network of eyeballs.”

“They had a lot of market power based on that presentation,” the attorney general added. “And now they are acting much more like publishers because they’re censoring particular viewpoints and putting their own content in there to to diminish the impact of various people’s views.”

DOJ’s announcement comes on the heels of Google collaborating with NBC News to demonetize The Federalist over its comments section on Tuesday.

This also comes two weeks after President Trump signed an executive order declaring his administration would review Section 230 and make policy recommendations that protect the American people from online censorship and blacklisting by Big Tech.

Republican lawmakers like Senators Josh Hawley (Mo.) and Ted Cruz (Texas) are also taking steps to address the monopoly powers wield by the Silicon Valley tech overlords at Google and others.

Today I’m introducing new legislation to combat #BigTech censorship. It gives users the right to sue if the big platforms enforce their terms unfairly or unequally. Proud to be joined by ⁦@marcorubio⁩ ⁦@SenTomCotton ⁦@SenatorBraun⁩ https://t.co/OcvXfHXPYk

Those like Judge Napolitano & Sen Mike Lee, who say Twitter has untouchable autonomy as a private corporation, are ignoring that Sec 230 legal immunity for social media sites is like FDIC deposit insurance for banks & customers — it MUST come with restrictions like Glass Steagall Act that accompanied FDIC insurance.