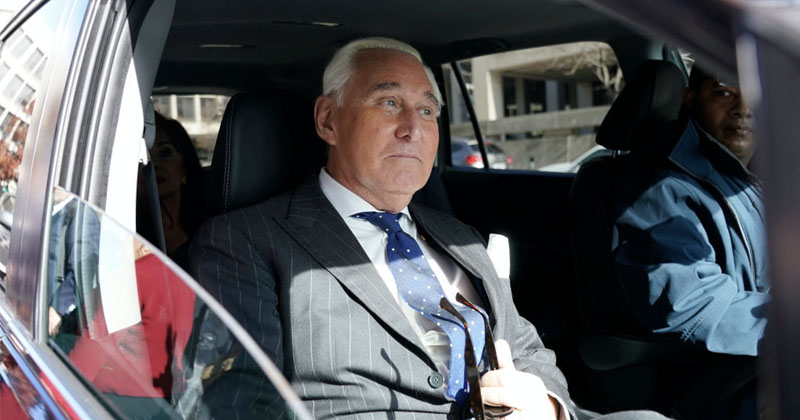 Additionally the Department of Justice released a new filing calling for the court to determine the amount of prison time for Stone, but added that 7-9 years was “unwarranted.”

“The defendant committed serious offenses and deserves a sentence of incarceration that is ’sufficient, but not greater than necessary.’ Based on the facts known to the government, a sentence of between 87 to 108 months’ imprisonment, however, could be considered excessive and unwarranted Ultimately, the government defers to the Court as to what specific sentence is appropriate under the facts and circumstances of this case,” Justice Department lawyers said.

The Department of Justice announced it would scale back prosecutors’ original sentencing recommendation of 7 to 9 years for Roger Stone, claiming it was a “disproportionate” punishment.

In a statement to Fox News, the DOJ said the sentence recommended by federal prosecutors was inconsistent with what they were told.

“The Department finds seven to nine years extreme, excessive and grossly disproportionate to Mr. Stone’s offenses,” the source said, adding that the DOJ will clarify its position on sentencing later Tuesday.

Prosecutors had stated Monday that Stone’s lengthy sentence would “send the message that tampering with a witness, obstructing justice, and lying in the context of a congressional investigation on matters of critical national importance are not crimes to be taken lightly.”

The DOJ’s about-face comes after President Trump pointed out the grossly unfair nature of convicting a first time-offending 67-year-old man to nearly a decade in prison for a nonviolent and victimless crime.

“This is a horrible and very unfair situation,” Trump tweeted Monday. “The real crimes were on the other side, as nothing happens to them. Cannot allow this miscarriage of justice!”

Stone was convicted in November by a jury of anti-Trump and Obama holdovers in a trial presided over by Obama appointee Judge Amy Berman Jackson, whom Tucker Carlson charged was “transparently and aggressively political.”

This story will be updated as it develops.

Alex Jones talks to Tyler Nixon about the latest updates on Roger Stone’s punishment for opposing and winning against the establishment.