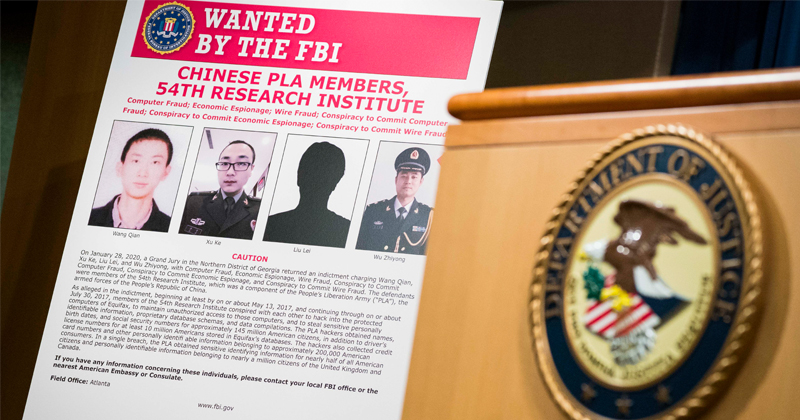 The Department of Justice has charged four Chinese military hackers with breaching the computer networks of the Equifax credit reporting agency – accessing the personal information of tens of millions of Americans.

In addition, the four are accused of stealing Equifax trade secrets, according to the Associated Press.

“This was a deliberate and sweeping intrusion into the private information of the American people,” said Attorney General William Barr in a statement, adding “Today, we hold PLA hackers accountable for their criminal actions, and we remind the Chinese government that we have the capability to remove the Internet’s cloak of anonymity and find the hackers that nation repeatedly deploys against us.”

The case comes as the Trump administration has warned against what it sees as the growing political and economic influence of China, and efforts by Beijing to collect data on Americans and steal scientific research and innovation. -AP

This is far from the first time the DOJ has targeted Chinese hackers. Last year, two Chinese hackers were indicted for their alleged involvement in a global hacking campaign carried out at the behest of the Tianjin office of China’s Ministry of State Security (MSS) – targeting 45 US tech companies and government agencies. The behavior allegedly happened over two time periods, one of which began in 2006, and the other beginning in 2014.

Hackers would infiltrate the cloud computing networks of ‘managed service providers’, then ‘hop’ from network to network’, gaining entree to the networks of these firms’ clients. In December, the US named some of the hackers suspected of working with the group known as “Advanced Persistent Threat 10” (APT10).

An investigation by Reuters found that “Cloud Hopper” impacted six additional firms aside from IBM and HPE, which it had previously reported. These included at least five of the world’s 10 largest tech service firms. In addition to HPE and IBM, the hacks emanated out to those firms’ clients, including Swedish telecoms firm Ericsson, and a handful of Japanese fims.

Professor Francis A. Boyle joins The Alex Jones Show to expose the latest on the coronavirus.