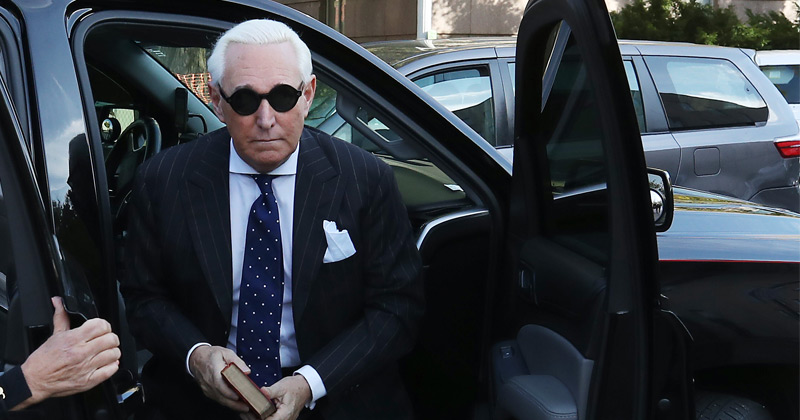 A memo from DOJ prosecutors Monday showed the feds want a sentence of 87-108 months for Stone, 67, after he was found guilty of witness tampering, making false statements to Congress and obstruction last November, stemming from the FBI Special Counsel’s phony witch hunt investigation into Trump-Russia collusion.

“Roger Stone obstructed Congress’s investigation into Russian interference in the 2016 election, lied under oath, and tampered with a witness,” the DOJ’s recommendation states. “And when his crimes were revealed by the indictment in this case, he displayed contempt for this Court and the rule of law.”

The lengthy term, prosecutors claim, “will send the message that tampering with a witness, obstructing justice, and lying in the context of a congressional investigation on matters of critical national importance are not crimes to be taken lightly.”

Federal prosecutors argued that Stone intentionally lied about his use of intermediaries to get information about WikiLeaks’ possession and release of hacked Democratic National Committee and Hillary Clinton campaign emails. They also said Stone hid the truth to protect the Trump campaign.

Stone’s defense, however, maintained that Stone did not have an actual inside connection with WikiLeaks. They also argued that there was reasonable doubt that Stone lied to congressional lawmakers.

Another defense Stone’s team put forward was that there was no way he could have lied about intermediaries between himself and WikiLeaks because there were no intermediaries. Radio host Randy Credico and author Jerome Corsi, who had allegedly been Stone’s go-betweens, never actually communicated with WikiLeaks, the defense said, even if Stone thought they had.

Stone’s team also filed its own recommendation Monday, according to The Washington Post.

It should be noted FBI Special Counsel Robert Mueller’s two-year-long investigation found no obstruction and no collusion between the Trump campaign and Russia.