There seems to be a false sense of security that somehow, the credit (debt) crisis is now slowly floating away into space. The market rally is indicative of this false sense of security. All bad news is ignored while slim glimmers of good news are enough to spark a rally. We are starting to look like the first quarter of 2007 when the idea that sub-prime was going to be contained in a tightly sealed silo and the market rallied all the way through August, only to be slashed to its current level. I’m not sure what data the bulls are looking at but it really doesn’t point to a recovery for sometime. In fact, many states are now revising their budgets for the fiscal year and things are a lot worse than they once appeared. California is now looking at a $20 billion budget deficit revised from the earlier $14.5 billion deficit only a few months ago.
These are things that I hope most of you are already aware of. Yet the focus has been taken away from the actual data in these toxic mortgages. Have things reached their apex of crap? Unfortunately they have not and let us go through a few reasons for this.

First, we’ll be looking at a sampling of 1% of first lien mortgages from the Fed that was put out in March of 2008:

The first thing I want to draw your attention to is the mean of these loans in various mortgage products. Overall, what we are seeing is distress on loan balances that seem below the median price of a home in the United States. The balances are not that high but remember that these are only for first lien mortgages and as we all know, many took out second mortgages and piggy-backed on these so they could go with little or no money down. It looks like the average size of a sub-prime loan ranges from $140,000 to $200,000. Out of the 1% sampling, we can get a quick glimpse and see that the bulk of these mortgages are ARMs; in this sample group over 70% of the sub-prime mortgage balance is in ARMs. So how are these mortgages performing?

Out of this small pool, already 47% of the ARMs are not current! 13% are foreclosed and 8% are real estate owned. Guess where that 16% 60+ is heading? You may be running the math above and see that it only adds up to 90%. You can assume that we are looking at 90+ lates or other forms of distress for that remaining 10%. Either way, the performance here is absolutely abysmal and that 16% is likely heading to further future distress in the market. That is baked in. But the next shoe to drop is the Alt-A loans. You know, the cream filling between an ultra-prime and sub-prime taco? Let us quickly look at that profile:

This is where things get even more disturbing. From this sample profile you’ll notice that the mean is much higher than the sub-prime pool. In fact, we have a range of $220,000 to $350,000 with the bulk of the loans being in the ARM profile and being close to $349,000. And by the way, many of these are in high priced areas like California. The first line above is observations which is the actual individual mortgages measured in this 1% sampling. Take a look at the first row and the second. Now you understand why the next shoe to drop is actually more distressing than the sub-prime profile. In fact, the size is comparable to the sub-prime portfolio. The nearly double in size is much more suspect and now that we know that ratings of AAA aren’t worth what they try to imply, we know many of these loans are going to go into some form of distress down the line. Look at the current status:

Already 19% of this portfolio is delinquent! And assuming many of these loans are in high priced areas like California, we have only entered the first stage of the debacle. In fact, the median year over year price was still positive as late as the 4th quarter of 2007! So you can certainly expect this number to balloon. Just take a look at the notice of default chart below: 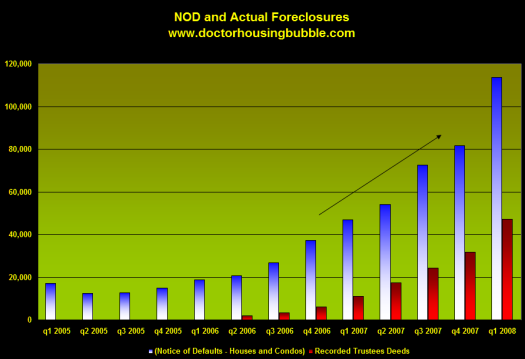 What you’ll notice is how quickly these notice of defaults are turning into foreclosures. If this is any guide to the future, these loans are going to get hammered into the ground. And of course, California is living in another dimension assuming that we are at a bottom. Now take a look at the California “non-prime” aka banana republic mortgage profile: 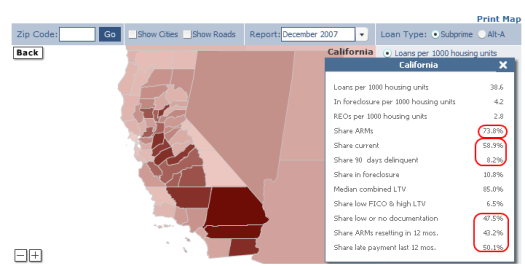 And by the way, anyone that bought in California in the last three years is most likely already underwater so any of these additional bailouts will not help since these folks are in negative equity positions. Severe negative equity. And you notice how the above is first liens? A high percentage have junior liens and they have no desire to let the property go since it will very likely wipe their loan out completely. That is why you are seeing such a delay in short sales getting done. The loss mitigation department with the first lien in most cases wants to work with you but the junior note holders have no rush to cancel out their debt. That is why cram downs are so important to improving the market. This way, judges can force and approve these deals without other parties delaying simply because they are delusional they’ll get some money back. They won’t. The industry is shooting itself in the foot here. Many of the bailout proposals on the table at a minimum require some equity which rules out the vast majority of California loans. And that is assuming most people are willing to stay in an asset that is depreciating with no potential of equity for a very long time. Most are deciding to practice the new modern dance of moonwalking away from their mortgages.

I am extremely disappointed with our leadership and this isn’t just me:

“WASHINGTON DC (CNN) — A new poll suggests that President Bush is the most unpopular president in modern American history.”

A fitting way to end the final year in office. Can’t get lower approval than that and just look at the state of our country today. Am I blaming this entire mess on one person? Of course not! The current Congress is just as bad on both sides. But when you are commander and chief (aka CEO of the U.S.) the buck stops with you. If this were a publicly traded company he’d been fired a long time ago. No one has a crystal ball but even a toddler can understand that giving people mortgages that they cannot pay is a recipe for disaster. The invention of perpetual housing appreciation was a myth. The “ownership society” was an Orwellian ploy to screw the vast majority of Americans. When they marketed ARMs with the blessing of Greenspan it was for prudent investing and to free up additional resources. Of course the absolute inverse happened. And why not? No one bothered to enforce any of the regulations on the books. This government was preoccupied with destroying the future of our country and putting us into an incredible amount of debt. Anyone that thinks are country is in good financial shape is out of their minds and probably still thinks these mortgage products were good ideas. Thankfully, 70 percent of the country disagrees with how things are being handled at the top. When you build your entire fortune and fortress on a volcano, don’t be angry when it explodes.