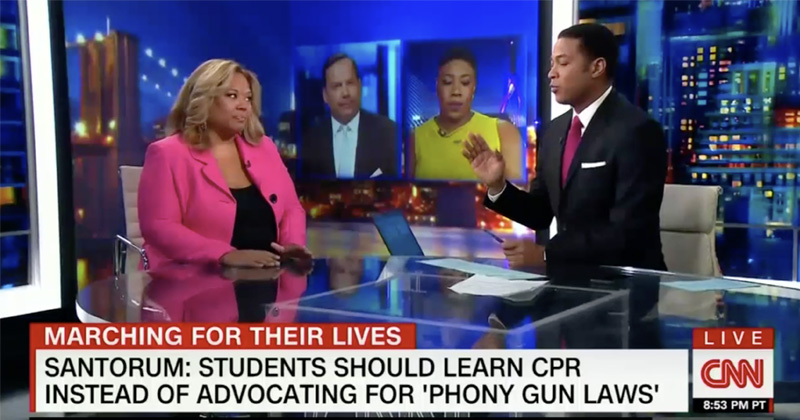 Criticizing the anti-gun rhetoric from the Parkland student activists means “you are the bad guy,” says CNN’s Don Lemon.

Lemon got into a heated debate with CNN commentator Tara Setmayer after she started criticizing the incendiary anti-gun rhetoric coming from some of the Parkland students during the March for Our Lives rally last weekend.

Setmayer cited an example of them chanting the “NRA has the blood of children on their hands,” and other harsh language directed at law-abiding individuals and entities that had nothing to do with the shooting.

Lemon dismissed the over-the-top rhetoric, saying “of course, they’re kids, they’re gonna be saying those things,” adding that they “feel the same way the rest of Americans feel.”

Setmayer retorted that “they’re kids, but we’re elevating them to a point now where they’re now making policy in America.”

“Most Americans don’t think we shouldn’t have a Second Amendment,” she said. “If you criticize some of what they’re saying, then all of a sudden you’re the bad guy.”

“You are the bad guy,” Lemon snapped.

After Setmayer responded, “No,” he insisted: “Yes, you are, you are. These kids suffered an unimaginable tragedy. You let them vent, and then you move on.”

Yeah the left isn’t elevating them at all – Soros-funded groups only built them a giant stage in Washington DC to spout authoritarian leftist talking points in front of millions of people worldwide.

And of course, facts are secondary with CNN when giving the anti-gun students a platform, as host Brian Stelter pointed out on Monday.

“Brian, we as a business have been giving these kids a lot of coverage,” said HLN host S.E. Cupp. “All the networks have in some way or another. But the policies is the tough part. Do you think in showing these kids so often, as often as we all do, we’re doing actually them a disservice because the policy is actually what’s going to change this?”

“A disservice is a strong word, but when I was interviewing David Hogg only ten days after the massacre, there were a few times I wanted to jump in and say let’s correct that fact,” Stelter said. “And at one of the times I did and other times I did not. There’s always that balance, how many times you’re going to interrupt.”

Yes, CNN is always looking for that balance of fact and unbridled anti-Second Amendment rhetoric.