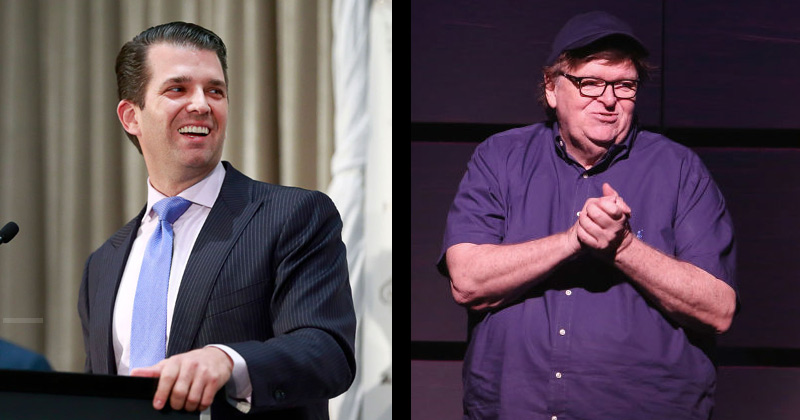 On Friday, prior to Irma making landfall in Florida, Moore asked if the compound had been opened as a safe haven.

Has he opened up Mar-a-Lago as a shelter yet?

“Has he opened up Mar-a-Lago as a shelter yet?” Moore inquired.

The president’s son responded on Sunday, pointing out it wasn’t a good idea to send people to a flood-prone area that was under mandatory evacuation orders.

It's on an island on both the ocean & intercostal and in a mandatory evacuation zone… probably not the best idea, but you know, narrative! https://t.co/Ji5V5lh7ya

“It’s on an island on both the ocean & intercostal and in a mandatory evacuation zone… probably not the best idea, but you know, narrative!” Donald Jr. shot back.

The Trump Organization responded Friday to a mandatory evacuation order issued for the region by Palm Beach County officials.

“Our teams at our four properties in Florida are taking all of the proper precautions and are following local and Florida State Advisories very closely to help ensure that everyone is kept safe and secure,” Trump Organization spokeswoman Amanda Miller said. “Our three private properties in Florida – The Mar-a-Lago Club, Trump International Golf Club, Palm Beach and Trump National Golf Club, Jupiter have all been closed.”

Videos shot over the weekend show some of the devastation that befell West Palm Beach:

Irma whipping up the Intracoastal in West Palm Beach. pic.twitter.com/b96PM2Mv37

Brave men help rescue a diver who was swept away by flood in #WestPalmBeach . Hats off to the real heros. #HurricaneIrma #Florida pic.twitter.com/eEPkYTqbyA

Even the left-leaning Mediaite had to give Donald Jr. props for his masterful takedown of Moore, confessing things haven’t been going so well for the liberal filmmaker.

“Moore’s off-game has not been limited to Twitter. In recent days, his anti-Trump one man show, ‘The Terms of My Surrender,’ was trashed by reviewers with the New York Times panning it as ‘shaggy and self-aggrandizing,'” Jon Levine wrote.