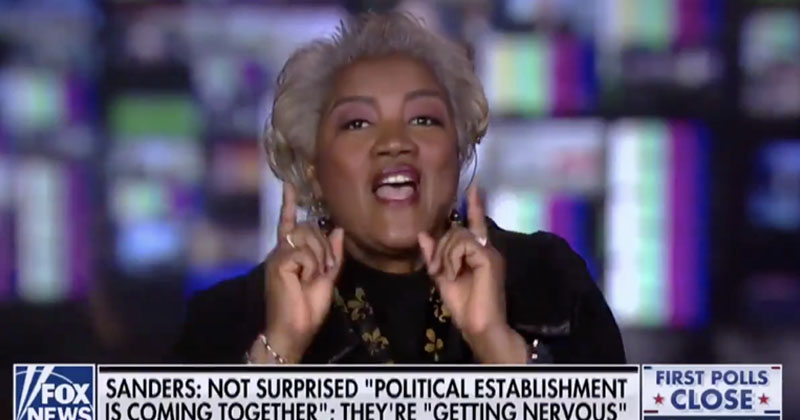 Fox News contributor Donna Brazile told RNC Chairwoman Ronna McDaniel to “go to hell” for bringing up the ideological division within the Democrat Party amid the primaries.

McDaniel joined Fox News Tuesday to explain how the establishment Democrats are preparing for a brokered convention in an attempt to steal the nomination from socialist candidate Bernie Sanders like the DNC did in 2016.

The Democrats’ divide between the far-left and moderate factions are “leading towards potentially a brokered convention, which will be rigged against Bernie if those superdelegates have their way on that second vote,” McDaniel said.

Watch @donnabrazile go on an Unhinged Rant and tell @GOPChairwoman to “Go to hell” for giving her opinion on the Dem Primary.

Considering Donna leaked debate questions to Hillary in the 2016 primary, I understand why this is a sensitive topic for her
pic.twitter.com/9KOVJ4wQC5

The remarks clearly triggered Brazile, who had admitted after the 2016 election that the DNC did indeed rig the process against Sanders in favor of Hillary Clinton.

“First of all, stay the HELL out of our race,” Brazile exclaimed. “First of all, they don’t have a process. They’re canceling primaries. They have winner-take-all. They don’t have the kind of democracy that we see on the Democratic side. And for people to use Russian talking points to sow division among Americans — that is stupid!”

“So Ronna, GO TO HELL! Go to hell!” she snapped. “We are not trying to prevent anyone from becoming the nominee. If you have the delegates and win, you will win.”

“This notion that somehow another Democrats are out there trying to hurdles and roadblocks before one candidate — that’s stupid! I know what’s going on. They are scared of Democrats coming together to defeat Donald Trump,” she added.

Her remarks are incredibly awkward and hypocritical considering she point-blank admitted that the DNC rigged the nomination process against Sanders in 2016.

Brazile confessed in her book Hacks: The Inside Story of the Break-ins and Breakdowns that Put Donald Trump in the White House, that Clinton’s campaign took “control (of) the party’s finances, strategy, and all the money raised” in exchange for taking care of the ballooned debt leftover from Obama’s 2012 campaign.

Brazile, who briefly chaired the Democratic National Committee following Debbie Wasserman’s Schultz’s ouster when the party’s corruption was revealed, said it wasn’t illegal, “but it sure looked unethical.”

“If the fight had been fair, one campaign would not have control of the party before the voters had decided which one they wanted to lead,” Brazile wrote. “This was not a criminal act, but as I saw it, it compromised the party’s integrity.”

“It’s ok, @donnabrazile. I’d be having a bad day too if my party was still hopelessly divided,” she said. “Talk of a brokered convention and the DNC trying to stop Bernie obviously hit a little close to home.”

I’d be having a bad day too if my party was still hopelessly divided.

Talk of a brokered convention and the DNC trying to stop Bernie obviously hit a little close to home.

Owen Shroyer breaks down why President Trump is bashing Fox News for hiring the disgraced Brazile.