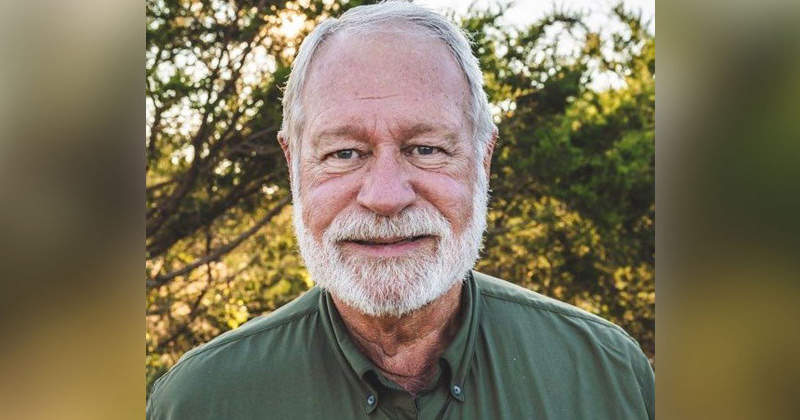 The man who stopped a gun-wielding maniac from causing further mayhem inside a Texas church says he’s no hero and acted out of instinct.

After shooting the deranged gunman who killed two at the West Freeway Church of Christ on Sunday, Jack Wilson, 71, told news crews he felt like he vanquished “evil.”

“I don’t consider myself a hero.”

Jack Wilson describes how he stopped a shooter at a White Settlement church yesterday @CBSDFW pic.twitter.com/dMRRoyS57u

Wilson, a Trump supporter who is also running for Hood County commissioner, said he’d observed the shooter, Keith Thomas Kinnunen, 43, as he walked into the church in White Settlement that day:

“From the time he walked in the door we had eyes on him, both physical eyes and cameras.”

Wilson, a former firearms instructor, credited his training for giving him the wherewithal to react properly in the situation.

“My training says that if I see a weapon, especially in that scenario, because that’s my job. I’m the deacon in charge of security at the church. The people that were on the security team, we’ve spent numerous hours training and working on this scenario. Hoping it never happens,” Wilson said.

“The whole thing was less than 6 seconds from start to finish. I had to make sure I didn’t hit someone, a member there, as they were right in front of me.”

Posting on Facebook, Wilson said he was put in a position where he had to “take out an active shooter in church,” and thanked God for giving him “the ability and desire to serve him in the role of head of security at the church.”

“I am very sad in the loss of two dear friends and brothers in CHRIST, but evil does exist in this world and I and other members are not going to allow evil to succeed,” Wilson wrote. 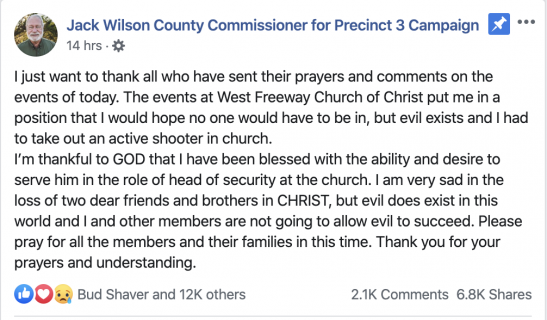 In a follow-up comment, Wilson revealed he used a Sig Sauer P229 .357 SIG to take down the armed intruder.

Despite his brave and heroic actions, Wilson humbly claims he’s no hero.

“Don’t consider myself a hero at all,” he says. “Did what I was trained to do,”

Wow. Meet Jack Wilson, the heroic Texan who took down to murderer at the West Freeway Church of Christ. He’s a former Deputy Sheriff, a firearms instructor & a candidate for County Commisioner. Many live today because of his bravery. https://t.co/6teGmn9wwd