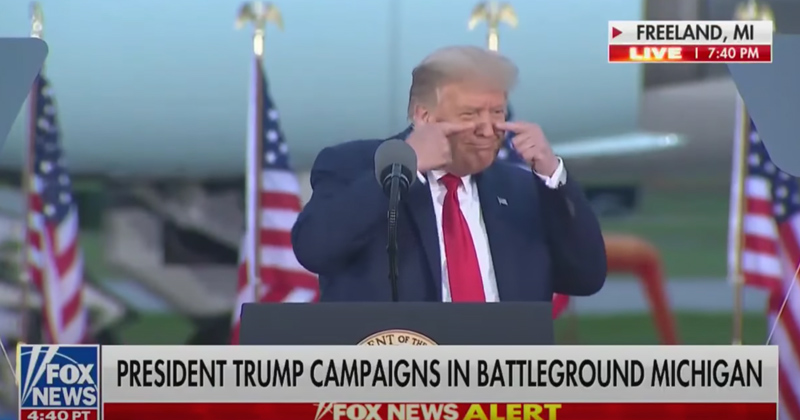 Attendees at a rally in Michigan nearly made President Trump break into tears as they loudly chanted, “We love you!” at him.

During the Thursday rally in Freeland, Trump was surprised to hear the crowd break into the chant, after which he claimed it nearly made him cry.

We Love You Chant- Don’t make me cry! #Trump2020 pic.twitter.com/j0A8iRqXpp

“Don’t say that,” he said, after pretending to wipe away fake tears. “I’ll start to cry, and that won’t be good for my image.”

Trump went on to recall a “fake news broadcaster’s” recent claims it was the first time they’d heard the chant at a political rally.

“And you know, it’s incredible, they said with all the years that they’ve been covering presidential elections they’ve never heard that chant, that we love you. That’s very nice.”

The president went on to mock the fake news media, saying they’d likely fact check his statements and claim he was wrong.

“You know, now they’ll say ‘He misrepresented… 18 years ago, there was a rally held by somebody, and we heard the words from two people that ‘We love you, sir.'”

“We love you!” to @realDonaldTrump pic.twitter.com/YPCpVhfUXe