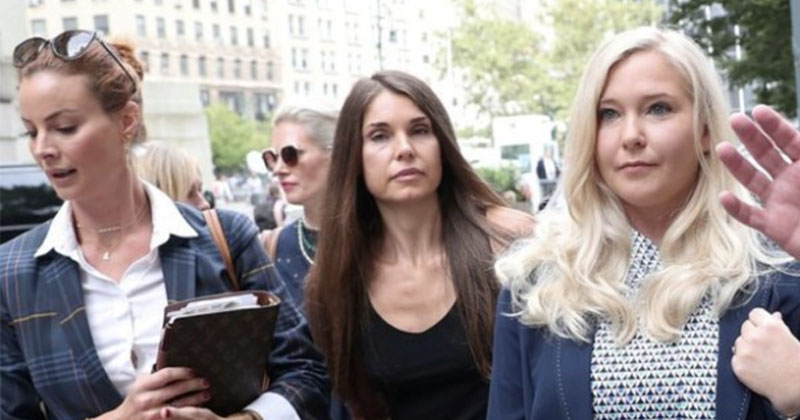 Over 30 women claiming to have been victims of Jeffrey Epstein appeared outside of a Manhattan court Tuesday to describe the abuses they allegedly endured at the hands of the late billionaire pedophile.

To the victims, including Epstein’s most well-known accuser Virginia Giuffre, the hearing is their last chance to tell their story to a federal judge before Epstein’s case is closed following his suspicious death in his prison cell earlier this month.

Many of the victims, some of whom haven’t been named, ripped Epstein as a “coward” who “ruined” their innocence and “robbed” them of the chance to confront the pedophile in court.

“Jeffrey Epstein sexually abused me for years,” said Courtney Wild, who says she was a middle schooler who wore braces when Epstein groomed her. “I feel very angry and sad and justice has never been served in this case.”

Another anonymous victims released this statement: “Jeffrey Epstein stole my innocence. He gave me a life sentence of guilt and shame. I do not consider myself a victim — I see myself a survivor. The abuse that I endured cannot continue. Let’s stop this before it happens to other young women.”

Other unnamed victims put out statements of their own for U.S. District Judge Richard Berman.

“I used to be relatively carefree, inquisitive, hopeful, and excited about life,” one accuser said. “But, my life changed because of Jeffrey Epstein. My perspective on life became very dark when I was unknowingly recruited by one of his agents. Jeffrey Epstein ruined me. His recruiter ruined me.”

“The far-reaching consequences of that day ruined my family’s lives. I’ve chosen to remain anonymous in order to protect my family from unwanted media attention.”

Another accuser said Epstein was very “strategic” in how he selected and groomed his victims.

“Each of us has a different story and different circumstances as to why we stayed in it,” said a woman identified as Jane Doe 2. “It was like the analogy where the frog is in the pot and the heat goes up over time.”

“He could not begin to fathom what he took from us,” she said. “I am every girl that he did this to and they are me. Today we stand together.”

The judge will likely close the criminal case against Epstein now that he’s dead, but the victims have vowed to sue his $577 million estate.

Lawyers of the victims also asked the U.S. Attorney’s Office and the FBI to bring all of Epstein’s “co-conspirators to justice.”

Alex Jones went on Louder With Crowder to break down the suspicious death of Jeffrey Epstein, and the damning evidence found in the Autopsy.