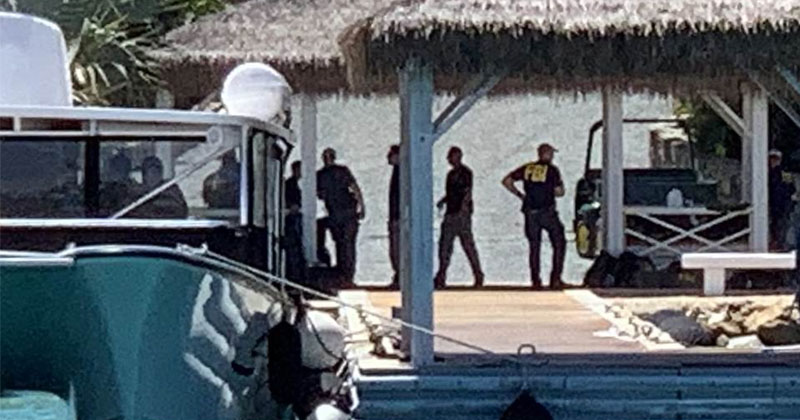 FBI officers were seen riding boats and driving golf carts around Epstein’s Little St. James on Monday, one of his private estates in the U.S. Virgin Islands.

Drone footage captured FBI and NYPD agents searching Epstein’s compound before noticing they’re being watched, who then proceed to cover the window with blankets.

An anonymous onlooker told the Daily Mail, “I’m on a boat charter with guests. We are the only guests out here at the moment. We were enjoying lunch when we saw over a dozen people getting off their speedboats and landing on the island.”

“When we looked harder, we could see the FBI logo on the backs of their shirts.”

“It didn’t take long for us to realize they must be conducting a raid on Epstein’s house,” he added.

The footage even shows what appear to be FBI diving teams snorkeling around the island’s rocky shoreline, presumably for evidence collection.

The raid comes two days after Epstein was found dead in his jail cell from apparent “suicide” on Saturday morning, which a former inmate claimed would have been “nearly impossible,” due to the heavy surveillance.

Epstein’s sudden and suspicious death also comes on the heels of 2,000 pages of documents unsealed by a federal appeals court implicating a number of high-profile individuals who flew on Epstein’s infamous “Lolita Express” jet to his island.

Several individuals named in the documents, such as Prince Andrew and Bill Clinton, were seen all but celebrating Epstein’s untimely death over the weekend.

Who knows what sorts of things the FBI may find on Pedophile Island.

RELATED: HERE’S ALL THE TWISTED SH*T FOUND IN EPSTEIN’S HOME DURING FBI RAID