Infowars has been receiving a torrent of complaints regarding the illegal, unconstitutional checkpoints being conducted by the Texas Department of Public Safety (DPS) along the South Texas border in what the DPS calls an attempt to confirm drivers are “complying with license, insurance and vehicle safety regulations.” 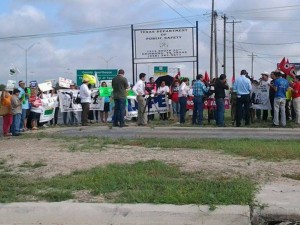 DPS says 15 percent of all “no driver license” citations have been issued in the same three counties, Cameron, Hidalgo and Willacy, which are all located in the Rio Grande Valley.

The checkpoints, which have been in effect since Sept. 15, have caused outraged citizens to set up Facebook pages warning the public of the time and location of the illegal checkpoints. One complaint submitted anonymously told Infowars, “People are scared to go into the streets and businesses are deserted.”

According to ThinkProgress.org, immigrant advocates are alleging that DPS is using the traffic checkpoints as a way to crack down on illegal immigration.

“The law enforcement agencies are saying that there is nothing going on and that they are not taking immigrants but they are,” read the anonymous complaint. “They are even going into houses and taking people” without warrants.

DPS director, Steven McCraw, made sure to address these complaints directly when he said, “It is important for everyone to know that these regulatory checkpoints have not and will not be used to ascertain immigration status,” said McCraw. “Moreover, reports that Border Patrol agents are present at these checkpoints are blatantly false.”

However, the move is reported to be enforced by multiple agencies.

As many of you know, the Department of Homeland Security (DHS) declared the border around the United States a “Constitution Free Zone” in 2009 after the George W. Bush administration laid the groundwork in 2008 for a policy allowing “suspicionless search-and-seizures,” specifically pertaining to electronic devices, which can be confiscated and the contents examined for any reason.

Anthony Gucciardi’s report on StoryLeak.com revealed the DHS’s unconstitutional declaration places 197 million citizens living in an area that doesn’t have a Constitution, many located within 100 miles of the border.

Today the DPS director defended the checkpoints, calling them “legal” based on the US Supreme Court case City of Indianapolis vs. Edmond, and by the Texas Court of Criminal Appeals case Lujan vs. State.

However, checkpoint programs with the primary purpose of detecting criminal wrongdoing has never been approved by the courts.

Also, the US Court of Appeals for the DC Circuit deemed neighborhood checkpoints set up by the police unconstitutional and to be in blatant violation of the Fourth Amendment, which protects citizens from unlawful search and seizures.

The checkpoints are reportedly targeting residents in low-income neighborhoods, causing many people to cancel doctors appointments and keep their American-born children home from school.

Local news station, KGBT, says there are people on both sides of the debate, some supporting the checkpoints while others showed major opposition. Both sides have created Facebook pages demonstrating their position.

The DPS says not to worry though, because their goal is solely to “protect drivers and passengers on the roadway,” not to target and jail illegals.

While we know the traffic checkpoints are meant to be temporary, there has been no word on when they will cease.

Highlighting the progressiveness of the true police state we are all now living in, the Dallas sheriff’s office has obtained a 19-ton diesel-operated behemoth containing bullet-proof doors and tires. The vehicle, created by a company that specializes in designing military equipment, is reportedly to be used in serving warrants on wanted men.

In Alex’s 1999 movie Police State 2000, he exposed the unconstitutional checkpoints, see below for the full clip.
Click here to purchase the 3-DVD police state trilogy.