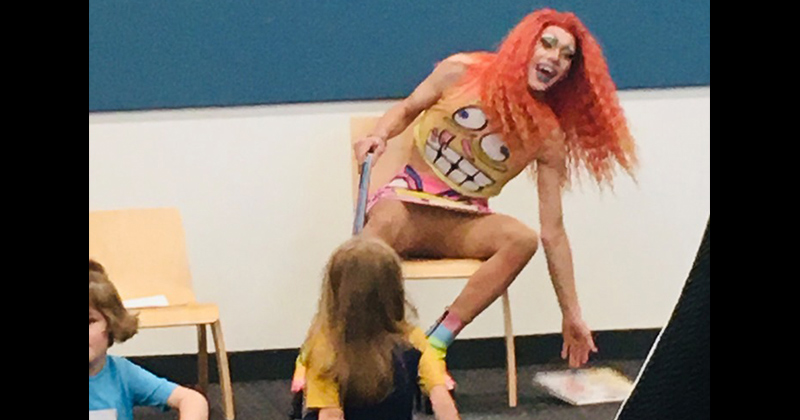 At yet another Drag Queen Story Hour event, a drag queen reportedly accidentally flashed a group of children.

Plenty of controversy has surrounded drag storytimes which have taken place at a variety of venues around America.

Those critical of the events consider them to be a waste of public resources, or, the fact that children are being exposed to something which has been historically associated with sexuality.

Some have expressed support for the event, stressing the importance of nurturing children within an environment of tolerance towards those with unorthodox identities.

At a drag queen story hour at Hennepin County Library in Hennepin County, Minnesota, a performer by the name “Sasha Sosa,” appears to accidentally flash their crotch at the audience during the event.

Sosa’s colleague, who performs under the pseudonym “Gemini Valentine” appears to take the floor wearing a revealing leotard.

The CPL discovered that both performers–Sosa and Valentine–regularly perform at strip clubs and are both believed to be in their late teens.

The taxpayer funded Hennepin County Library reportedly failed to carry out a background check on these performers before the event.

Earlier this year, the Houston Public Library had hired two drag performers for a story hour who had been convicted for child sex offenses.

Drag has enjoyed significant success in recent years thanks to a push from the mainstream media and entertainment industry.

Drag kids started to become popular around four years ago since the revelation of drag kid superstar, Desmond Is Amazing, after a major pride parade in 2015.

Even sufferers of Down’s Syndrome and dogs have been included in drag shows, bulldozing taboo and social construct alike.