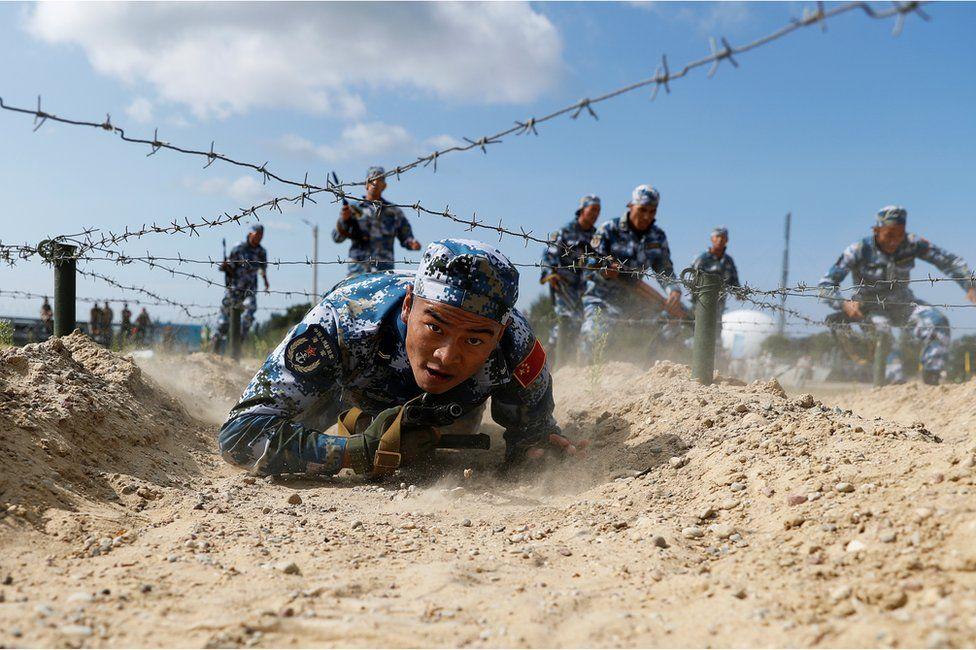 Footage emerging late this week from an annual military exercise hosted by Russia and involving China, India, and Pakistan has drawn the attention of western military experts who say it’s definitely “upped the ante this year” given the number of foreign forces and the sheer size of the drills, and especially given it’s the first time Russia’s historic political and economic rival China has joined the games, amid a rapid warming of relations as both face intense Washington pressure.

Along with the only newly invited China, as well as Pakistani and Indian forces, other central and east Asian countries are participating, including Kazakhstan, Kyrgyzstan, Tajikistan and Uzbekistan. What are called the ‘Tsentr exercises’ actually began all the way back in June but this week is considered the culmination of the most important “hot phase” drills focusing on “strategic command post exercise”.

Involving 120,000 military personnel, about 600 aircraft, up to 15 ships and additional support vessels, as well as over 20,000 weapons and support equipment, the massive games are being primarily conducted within the central military district in Russia (hence the name “Tsentr-2019”), as described by the Russian defense ministry.

In early September Russian Defense Minister Sergei Shoigu announced the multi-national games’ intent was not to focus on foreign enemies, but includes an “anti-terror” emphasis.

However, a number of observers have pointed out the showcasing of Russian military strength sends an unmistakable message to Washington and its western allies.

US state-funded media wing RFERL described the games as a “Kremlin-led military exercises… under way that simulate a large-scale invasion of a rogue state.”

One analyst, Mathieu Boulegue, a research fellow of the Russia and Eurasia Programme at Chatham House, has been cited in reports as saying China’s involvement this year is huge and sends a firm, unprecedented message in terms of Moscow’s growing powerful military alliances.

Alex Jones breaks down what’s going on in China and what it means for the rest of the world.

“The message is quite clear when it comes to Russia, it means that ‘we’re not alone, we have a lot of partners, we’re not isolated so whatever efforts the West are trying to do against us we are still able to have powerful military alliances with China, India and Pakistan’,” he said.