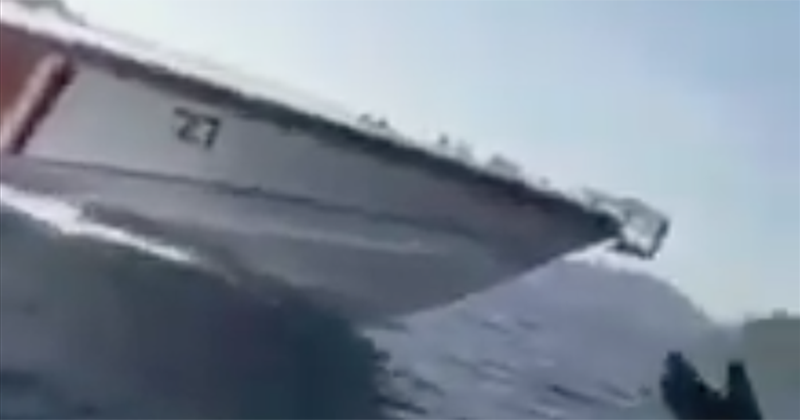 After a week which tragically witnessed a sudden uptick in refugee and migrant incidents and drowning deaths in the Mediterranean, a dramatic video has been published online showing the Turkish Coast Guard resorting to extreme measures while intercepting migrant boats.

The video, which first appeared via a Middle East Telegram or other social media channel, shows a small crowded motor boat full of Syrian refugees being rammed by a much larger Turkish patrol boat.

The video appeared online and went viral on Sunday; however, it’s uncertain the precise date or location, but it likely took place in the Aegean Sea.

The left’s preparations and tactics to label law abiding U.S. citizens as domestic terrorists for Virginia’s 2nd Amendment Rally are trickling out.

Women and children can be heard screaming in the video while trying to get away from the fast-approaching Turkish vessel, after which the larger coast guard boat rams into the migrants at high speed. It’s unclear the extent of injuries suffered by those in the packed boat, and no one appears armed or to have been acting aggressively.

Turkey’s coast guard has long been accused of taking harsh measures to prevent an estimated 60,000 to new refugees attempting to traverse the Mediterranean. It’s hardly the first time migrant and refugee boats have been rammed during the dangerous trip; however, past incidents have involved human-trafficking boats or piracy-related groups and not state actors like in this case.

Video leaked on social media shows a #Turkish coast guard boat ramming into a boat carrying #Syrian refugees in #AegeanSea preventing them from being trafficked into #Greece. Through this harsh measure, #Turkish Coast Guard prevented 60,000 Syrian refugees to go to #EU in 2019. pic.twitter.com/u2xFXr77yE

Meanwhile, Europe has documented a significant rise in migrants attempting to enter the EU via the eastern Mediterranean throughout 2019:

More than 82,000 migrants attempted to enter the EU from the eastern Mediterranean route in 2019, driven by the situation in Syria, and instability in Afghanistan, the Frontex Executive Director Fabrice Leggeri said in Brussels.

This after the peak of the migrant crisis in 2015 and 2016. Turkey’s President Erdogan has recently warned a flood of refugees could impact Greece and other EU states if more is not done to help Turkey stave off the crisis, even lately voicing it as a “threat” if the EU doesn’t support Ankara’s Syria plans.

Many are predicting 2020 could mark a return to the worst of the past five year crisis, given the ongoing Turkish military incursion in northern Syria and a resumed Russia-Syria military offensive against jihadist militants in Idlib province.