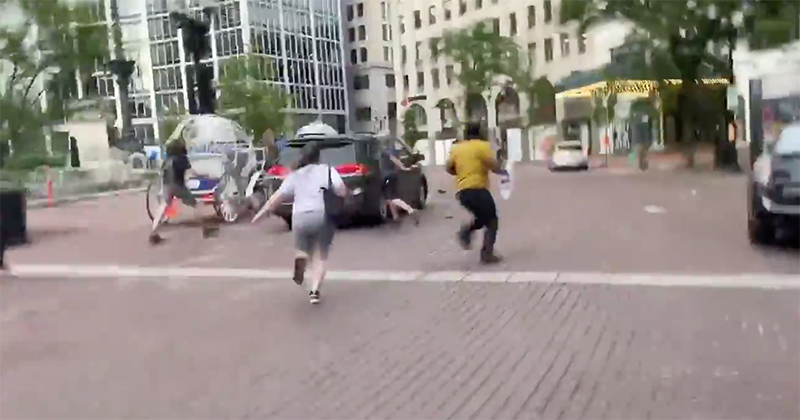 Stomach-wrenching video has captured a woman driving her minivan through a group of protesters in Indianapolis on the city’s 11th straight day of anti-racism and police brutality protests in the wake of George Floyd’s death.

The group of about 50 protesters was in the downtown Monument Circle area when a municipal truck arrived to take down barricades but was blocked by the protesters for a time. The minivan driver went to drive around the truck, struck several protesters and accelerated away from the scene, as captured in eyewitness video from the incident.

The encounter took place at about 8:30pm local time, after the day’s peaceful protests had died down, on the first day there had been no organized event.

One person was thrown off to the side, while two ended up on the hood of the minivan for a moment, before rolling off onto the ground when the driver slammed on the brakes. No serious injuries were reported.

Owen breaks down how the flag of globalism is actually right in all of our faces.

“There was a vehicle on the roadway while protesters took over the street,” said officer Genae Cook, a spokesperson for the Indianapolis Metropolitan Police Department. “There was damage done to the vehicle, and the vehicle attempted to leave the area.”

Here’s the video I got, which is late. pic.twitter.com/QgrAAiWiJK

Several bystanders reportedly caught up with the minivan before the driver took off, and smashed one window and damaged a wing mirror. The female driver was eventually caught by police and an investigation into the incident is underway.

Meanwhile, the officer accused of killing George Floyd in the incident that sparked the current spate of nationwide and international anti-racism and police-brutality protests has appeared in court. The judge set bail at $1.25 million.