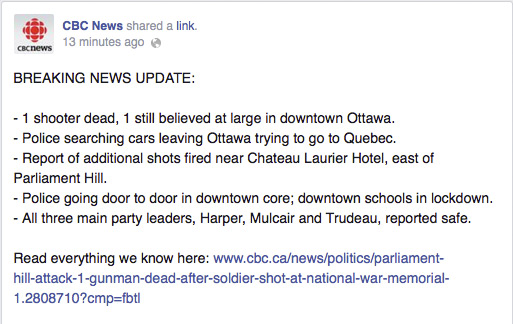 According to CBC News, police began implementing the measure shortly after door to door searches failed to locate a second suspect in Ottawa’s downtown core.

Reports from social media reveal that all major exits from Ottawa have been closed, with active searches targeting every single vehicle.

Information regarding the full extent of the searches has yet to be shared despite the massive undertaking, possibly due to the Canadian government’s crackdown on media coverage.

Journalists and citizens attempting to share breaking information over social media have been asked by the Royal Canadian Mounted Police to cease their activity, raising concerns of media censorship.

“The RCMP announcement is nothing short of an attack on the press because media outlets use social media as a source of news, and such censorship only benefits the government while doing little to ensure public safety,” noted Infowars’ Kit Daniels.

While the situation is undoubtedly tense, reports also indicate that police have gone as far as aiming their weapons at journalists and forcing them to the ground.

“Ottawa police tactical officers are here and very kindly pointed their guns at every reporter, ordering hands in the air and us to ground,” the Globe’s Josh Wingrove stated on Twitter.

The situation increasingly resembles the response seen after the 2012 Boston Marathon Bombing, where police conducted warrantless door to door searches while aiming rifles at innocent residents.

The shooting comes only days after two Canadian soldiers were struck by a vehicle allegedly driven by a radical Islamist in Quebec.