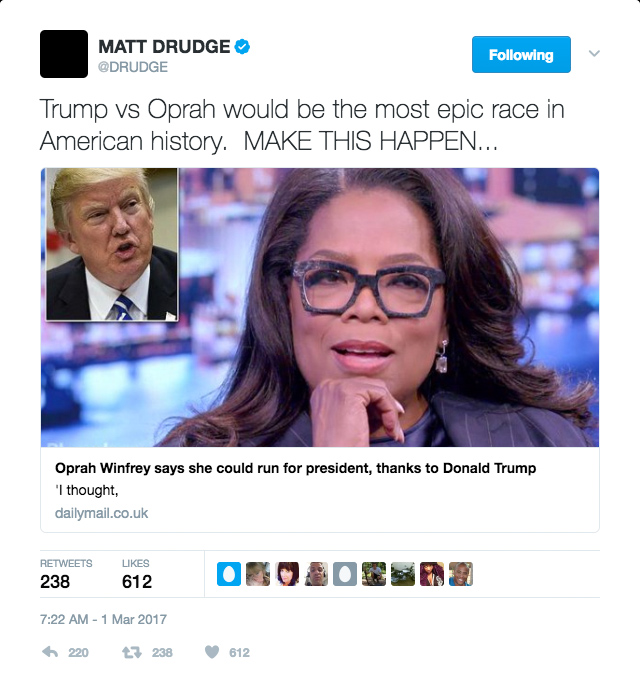 In a tweet sent Wednesday morning, the reclusive journalist who broke the Clinton-Monica Lewinsky scandal said such a race would be one for the ages.

“Trump vs Oprah would be the most epic race in American history. MAKE THIS HAPPEN…” Drudge tweeted to his nearly half a million followers.

The media mogul’s message follows comments featured in a Bloomberg interview taped in December but released Wednesday, in which Oprah claimed she had to rethink her candidacy after Trump beat Hillary Clinton in November.

“Have you ever thought that given the popularity you have, we haven’t broken the glass ceiling yet for women, that you could actually run for president, and actually be elected?” show host David Rubenstein asked.

“I actually never thought that that was – I never considered the question, even a possibility,” Oprah responded.

The interview’s release comes a day after President Trump delivered his first formal address to Congress.

Interestingly Trump once claimed he would consider Oprah as his running mate.

Back in 1999, when Trump was exploring a presidential run, the businessman claimed Oprah may be his vice presidential pick.

In his book, The Making of the President 2016, Republican political operative Roger Stone reveals Trump had considered the talk show host as his potential running mate, if only to cause waves in the media.

We decided to have [Trump] announce the formation of his exploratory committee on CNN’s Larry King Live on October 8, 1999. Larry’s show was hot back then and we believed it was the perfect forum for his announcement. I was concerned the committee announcement might not be strong enough to get him maximum exposure the following day in newspapers and on television. After all, there had been constant speculation about it for weeks.

I looked at him with a big grin and said: “If Larry asks you who you would select as a running mate, just say ‘Oprah.’ Everybody loves Oprah! The press will eat this up. It’s a win, whenever you throw out her name.”

Just prior to the Larry King appearance, I called a CNN connection I had known for years. “If you want a big story out of Trump’s appearance on King, have Larry ask him who he would pick as a running mate if he runs for president,” I said. And I promised the producer, with a wink, Trump’s answer will absolutely shock everyone. Despite the producer’s promise to pass along the info to Larry King, we had no way of knowing for sure whether Larry would take the bait and actually ask Trump the question.

Larry agreed to tape the interview with Trump during the day and air it later that night on his show. Trump had badly wanted to attend a dinner with Jesse Ventura that evening and schmooze with some of the Reform Party people.

Early in the interview, Trump dropped Bombshell Number One: “So I am going to form a presidential exploratory committee, I might as well announce that on your show, everyone else does, but I’ll be forming that and effective, I believe, tomorrow,” Trump told the crusty interviewer. “And we’ll see. I mean, we’re going to take a very good, strong look at it.”

And just minutes later, Larry went for it and asked him if he had a vice presidential candidate in mind. Trump hesitated briefly as if to ponder his answer and then stunned everyone including King – and no doubt Oprah herself. “Oprah. I love Oprah,” Trump said. “Oprah would always be my first choice. She’s a terrific woman. She is somebody that is very special. If she’d do it, she’d be fantastic. I mean, she’s popular, she’s brilliant, she’s a wonderful woman.” The following day the newspapers and TV news were filled with talk of Trump and Oprah.

The press ate it up and so did we!

Pick up Roger Stone’s book The Making of the President 2016 at InfowarsStore.com.