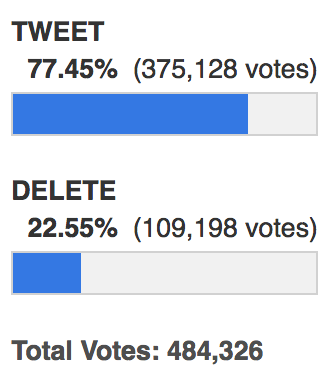 The Drudge Report conducted a poll asking readers if they would like to see President Trump continue using social media or not, and the message is loud and clear: America loves Trump tweets.

With nearly half a million votes cast at the time of this writing, support for the President’s use of socials stands at a stunning 77.45% with less than one in four respondents wishing he would stop.

The results starkly contradict findings from a Fox News phone poll of 1,017 viewers, 71% of whom felt that Trump was ‘hurting his agenda’ by using Twitter. The average age of Fox viewers is 68.

The Drudge poll was launched in the wake a liberal meltdown after Trump’s tweets about affianced MSNBC co-hosts “low IQ Crazy Mika” Brzezinski and “Pyscho Joe” Scarborough, and after the initial 175,000 votes had been cast, 74.46% backed Trump tweets. 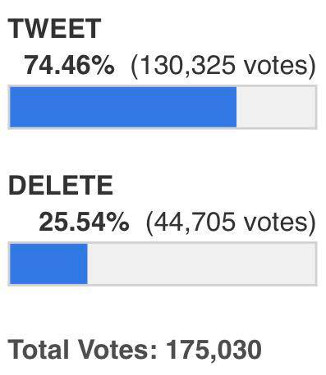 And then Trump ‘body-slammed’ CNN.

President Trump went all-in on Sunday, posting one of his most popular tweets of all time – a user-created video parody of Trump body-slamming pro wrestling tycoon Vince McMahon with McMahon’s head replaced by a CNN logo.

Despite leftists, media hacks, and celebrities reaching new stages of nuclear outrage, positive votes in the Drudge poll have continued to pour in, boosting endorsement of Trump’s “Modern Day Presidential” approach to connecting directly with the American public.

My use of social media is not Presidential – it’s MODERN DAY PRESIDENTIAL. Make America Great Again!

After a week in which investigative reporters at Project Veritas dropped bombshell after bombshell on CNN, and the globalist press were savaged by the alt media and watchdogs alike, Trump has utilized socials to turn up the heat on the #FakeNews media – a move that is likely emboldening his supporters to stay involved and keep a bright spotlight pointed at the anti-American narrative manipulators who have been deceiving them for decades.

“The fake media is trying to silence us but we will not let them,” Trump said during a speech at the Celebrate Freedom Rally on Saturday. “The people know the truth. The fake media tried to stop us from going to the White House, but I’m president and they’re not.”

“The dishonest media will not stop us from accomplishing our objectives on behalf of the American people,” he continued. “Their agenda is not your agenda.”

….the 2016 election with interviews, speeches and social media. I had to beat #FakeNews, and did. We will continue to WIN!

“The FAKE & FRAUDULENT NEWS MEDIA is working hard to convince Republicans and others I should not use social media – but remember, I won the 2016 election with interviews, speeches and social media,” Trump Tweeted on Saturday. “I had to beat #FakeNews, and did. We will continue to WIN!”

The media’s obsession with Trump tweets has provided an effective smoke screen while he implements the America First agenda and dismantles destructive globalist programs, most recently and aggressively phased in by Barack Obama.

“Last week was a great example: While the fake journalists at the NYTimes, CNN, MSNBC, the WaPo and the three broadcast networks gave most of their print space and air time to rants about the President’s latest tweets about Mika and Joe, the President’s EPA announced the full repeal of the horrible Obama-era power grab called the Waters Of The United States rule,” writes energy analyst David Blackmon. “This massive regulation would have basically given the EPA authority to regulate any temporary or permanent body of water in the entire nation, including puddles in your lawn, drainage ditches, overflowing swimming pools, and even city streets that are designed to carry storm water that ultimately drains into rivers and lakes.”

Trump’s most recent tweet was an offer to assist the family of Charlie Gard, a dying baby from the UK whose parents are seeking potentially life-saving experimental treatment for Charlie in the United States, but have been blocked from traveling to do so by UK and EU courts who have ordered that the boy’s life support be turned off despite the Gards raising over $1 million dollars for his treatment.

If we can help little #CharlieGard, as per our friends in the U.K. and the Pope, we would be delighted to do so.