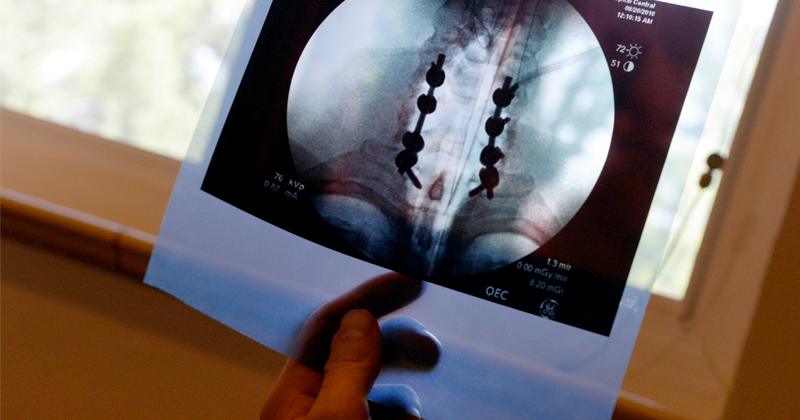 The early-stage research in rats, by a group of scientists led by Imperial College London, revealed two existing medications can boost the body’s own repair machinery, by triggering the release of stem cells from the bone marrow.

The scientists published their research in the journal npj Regenerative Medicine.

The team say the two drugs (currently used for bone marrow transplants and bladder control) could be used for different types of bone fractures, including to the spine, hip and leg, to aid healing after surgery or fractures.

When a person has a disease or an injury, the bone marrow (the spongy tissue within bone) mobilises different types of stem cells to help repair and regenerate tissue.

The new research, involving scientists from Beaumont Health in the U.S, suggests it may be possible to boost the body’s ability to repair itself and speed repair, by using new drug combinations to put the bone marrow into a state of ‘red alert’ and send specific kinds of stem cells into action.

In the new study, funded by Wellcome, the researchers used drugs to trigger the bone marrow of healthy rats to release mesenchymal stem cells, a type of adult stem cell that can turn into bone, and help repair bone fractures.

Professor Sara Rankin, corresponding author of the study from the National Heart and Lung Institute at Imperial College London, said: “The body repairs itself all the time. We know that when bones break they will heal, and this requires the activation of stem cells in the bone. However, when the damage is severe, there are limits to what the body can do of its own accord. We hope that by using these existing medications to mobilise stem cells, as we were able to do in rats in our new study, we could potentially call up extra numbers of these stem cells, in order to boost our bodies own ability to mend itself and accelerate the repair process. Further down the line, our work could lead to new treatments to repair all types of bone fracture.”

The two treatments used in the research were a CXCR4 antagonist, used for bone marrow transplants, and a beta-3 adrenergic agonist, that is used for bladder control.

The rats were given a single treatment with the two drugs, which triggered enhanced binding of calcium to the site of bone injury, speeding bone formation and healing.

The researchers stress they did not analyse restoration of movement in the bone, or repair to additional tissue such as nerves.

One of the drugs used in the study was found to trigger fat cells in the bone marrow to release endocannabinoids, which suggests they may have a role in mobilising the stem cells and thereby promoting healing. However, the researchers add that phytocannabinoids (such as cannabis) would not have the same effect, as they act on the brain rather than the bone marrow.

The researchers say the drug combinations now need to be tested in humans.

Dr Tariq Fellous, first author of the research from Imperial’s National Heart and Lung Institute (NHLI) said: “We first need to see if these medications release the stem cells in healthy volunteers, before we can then test them in patients with fractures. We have the drugs and know they are safe to use in humans – we just need the funding for the human trials.”

Dr Andia Redpath, co-first author from the NHLI, added that repurposing existing medications that help the body heal itself – so called Regenerative Pharmacology – could have great potential as an efficient and cost-effective approach for a range of diseases. “Rather than devising new stem cell treatments from scratch that involve lengthy and expensive trials, our approach harnesses the power of the body’s own stem cells, using existing drugs. We already know the treatments in our study are safe, it’s now just a matter of exploring further if they help our bodies heal.”