The Royal Dutch Airlines tried to use seat belts for a pro-LGBT message, but as 4Chan noticed, only the “heterosexual” buckles fastened together correctly.

The tweet shows three belts, with the top representing a lesbian couple, the middle a gay couple and the bottom a heterosexual couple, but 4Chan anons noted the top two belts won’t fasten at all. 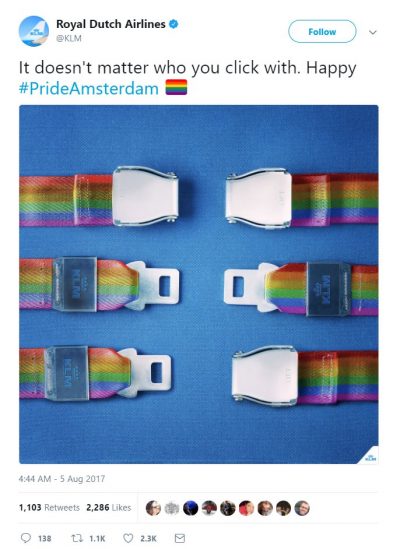 “In the event of an crash only one of those seatbelt combinations is going to result in saving the human race,” one anon said.

It was suggested that whoever made the image was subtlety advocating traditional marriage.

“Based KLM demonstrating the natural law understanding of sex and marriage. Gay marriage is nonfunctional as a social good because it’s incapable of producing offspring,” a more conservative anon stated.

Or maybe the graphic designer is just clueless.

“We’ve got to the point where you literally can’t tell if they’re putting not so hidden messages in their propaganda as resistance or are simply this retarded,” another anon pointed out.

Regardless of your stance on the LGBT movement, the tweet is a reminder of how the political-corporate class keeps force-feeding various social justice movements to the public instead of allowing such movements to gain organic acceptance.

If the movement is worthy of public support, it will ultimately gain acceptance in the free market of ideas. Some may take longer than others, but throughout history there’s always been a trend in which a movement once deemed “unacceptable” is now completely kosher, or vice versa.

That’s why the elites keep their decadent hobbies away from public view despite the fact they openly practiced them centuries ago.

The point is, when a movement is force-fed to the public, it’s usually because there’s a puppet master exploiting it to advance another, sinister agenda beyond the scope of the movement.

Feminism is a great example of this. What once started as a genuine women’s rights movement decades ago has since been hijacked by the political class to destroy the nuclear family and thus make women more dependent on the state – all while making them ultimately unhappy as they make major life decisions based on lies.

This social engineering also destroys men because the establishment tells them to curtail their natural masculinity, which effectively leaves them as beta males who are good at video games, but not good with women.

And that, of course, leads to the decline in birth rates Western countries are now experiencing, and to “compensate” for this, globalists leaders advocate open borders and the resettlement of third-world migrants who are used to authoritarianism and thus will gladly support the expansion of the state.

In short, the elites often hijack and steer social justice movements as a top-down system of control used to divide and conquer the population – and that’s why you’re seeing so many movements being force-fed to the public even though some of their core tenets would gain public acceptance on their own.