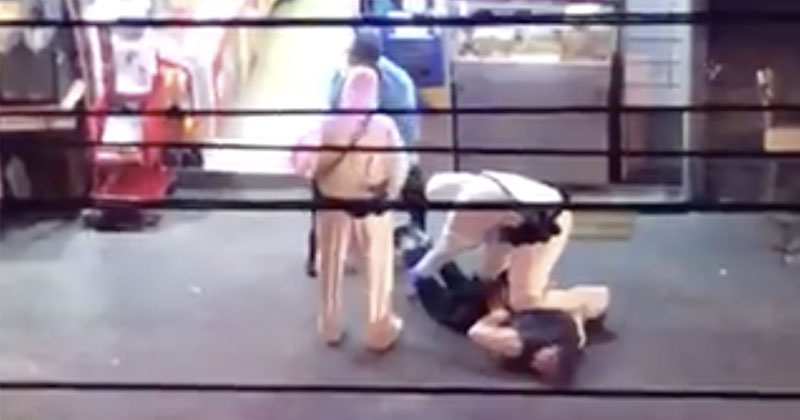 An Israeli broadcaster has aired dramatic video in an eerie dystopian sign of where things are possibly headed in terms of securing quarantined zones in urban areas, and at a moment various governments around the world are militarizing their Covid-19 outbreak response planning.

Security forces in Tel Aviv are seen in full protective gear surrounding and then subduing to the ground a man who had allegedly violated his home quarantine and made his way to a nearby train station.

“Israel Police stated that a man, 47, was found on Bograshov St. in Tel Aviv after refusing to stay in quarantine,” according to The Jerusalem Post. “He had been involved in an attack on security guards at the city’s Hahagana train station.”

Dystopian scene of a man in Tel Aviv being arrested for violating his coronavirus quarantine. pic.twitter.com/miEf8XzSDC

A subsequent Israeli police statement issued Saturday night said: “The police call on the public to listen to directives and instructions from the Health Ministry; not following them disrupts the national effort to fight the outbreak of the virus and its spread in Israel.”

This was followed in the same statement with a directive on not “spreading fake news” about coronavirus in Israel:

“Additionally, there is an absolute prohibition on spreading fake news whose sole purpose is to plant panic throughout the public. Relevant and authoritative information, including updates and official directives, will be published only by authorized officials and on the Health Ministry website.”

Another angle of the bizarre incident in Tel Aviv Saturday night:

Another angle of the arrest in Tel Aviv of a man violating his coronavirus quarantine. pic.twitter.com/DDfm35EWZ2

“We will very soon begin using technology… digital means that we have been using in order to fight terrorism,” Netanyahu said.

This just as Tel Aviv announced the closures of all restaurants, pubs, threaters and public gathering places – essentially placing the country on lock down. “We are at war with an enemy: the coronavirus,” the prime minister said, “an invisible enemy.”

Once these “emergency measures” are implemented, they will never ever be repealed.https://t.co/cu5EDpQglY

With ‘wartime’ tactics and rhetoric increasingly being deployed by government leaders in countries where the outbreak is spreading, and military checkpoints and quarantines being set up, further with talk of putting “the collective interest above all” — get ready for more insane Orwellian scenes like the above to possibly come to a neighborhood near you